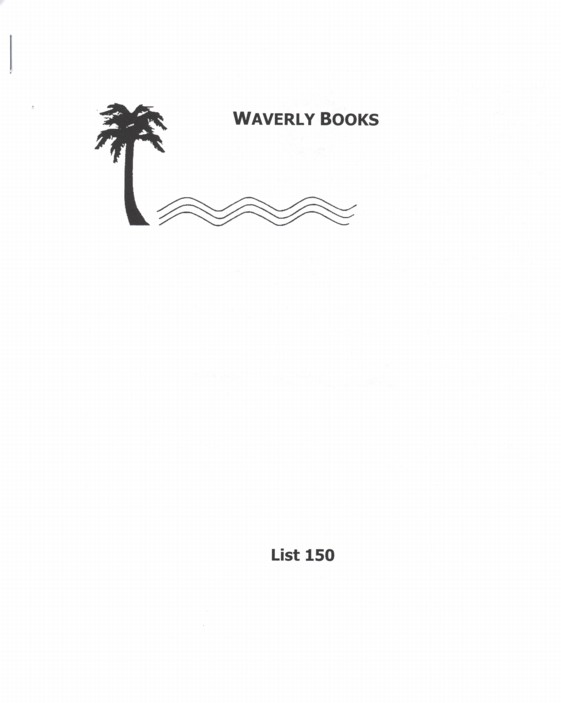 Waverly Books has just issued what might be called its sesquicentennial edition: List 150. Waverly offers almost twice that many items, primarily novels, filmscripts, poetry, photographic and art books, and more, mostly from the 20th century. It is filled with names and titles you know well, along with some perhaps less familiar. If these fields are of interest to you, then Waverly's catalogue will undoubtedly be so too. Here are a few of the items you will find.

Many of the titles Waverly offers had two lives, first in book form, and later as movies (generally reaching much wider audiences on film). For example, item 205 is a first edition, from 1969, of Mario Puzzo's The Godfather. This was a very popular book, but the films were astronomical. Though Marlon Brando died off in the first go-round, it led to...how many sequels? Fifteen? Twenty? I lost track a long time ago. Still there is nothing like the original, and this is it. Priced at $1,250.

If the Godfather isn't bloody enough, then how about this Alfred Hitchcock horror classic -Psycho? Item 51, naturally enough, is not the movie but the book. It was written by Robert Bloch and this first edition was published in 1959. $1,000.

Here is a book that will take you back to the years of the space race. The title is Moon Shot, by Alan Shepard and Deke Slayton, introduction by Neil Armstrong. Shepard and Slayton were among the first group chosen to be American astronauts, while Armstrong was first to walk on the moon. Shepard, who was the first American to go into space, a short, suborbital ride in 1961, has inscribed this copy of the 1994 first edition. Item 33. $250.

Item 32 is another science nonfiction, this one called Men From Earth, by Buzz Aldrin and Malcolm McConnell. Being number two is not quite the same as being number one, so Aldrin's name is not as familiar as Armstrong's. However, it was Aldrin who followed Armstrong out the door of the Lunar Module, the second man to walk on the moon. This first edition is signed by Aldrin and comes with a card photograph of him on the moon. $250.

For baseball fans, Waverly has a selection of signed books by people known more for their dexterity with a bat than a pen. There is Willie Stargell, Tom Seaver, Tommy John (Okay, Seaver and John are known for pitching, not hitting), Lenny Dykstra, and Joe Morgan. There is also one from the immortal Brooklyn/Los Angeles Dodger broadcaster Vin Scully and a signed photograph of Casey Stengel.

If you prefer movie stars, there are signed works by Olivia de Havilland and Douglas Fairbanks, Jr., or a signed photograph of Hedy Lamarr. Or, if rock music is your interest, there is Don Henley of the Eagles, David Byrne of the Talking Heads, and Ray Manzarek, one of those other guys in the Doors. And then there is the former President and First Husband hopeful, Bill Clinton, inscribing his 2004 first edition of My Life. Item 202. $500.

Item 166 contains an inscription from the South American poet Pablo Neruda. Neruda is considered one of the greatest poets of the 20th century, not just of South America but of anywhere. Offered is a second edition of his Estravagario, published in 1969. It contains a lengthy inscription to fellow Chilean poet Jorge Teillier. It ends, "To rise to the heavens one needs, Poetry, Love and friendship." $1,250.