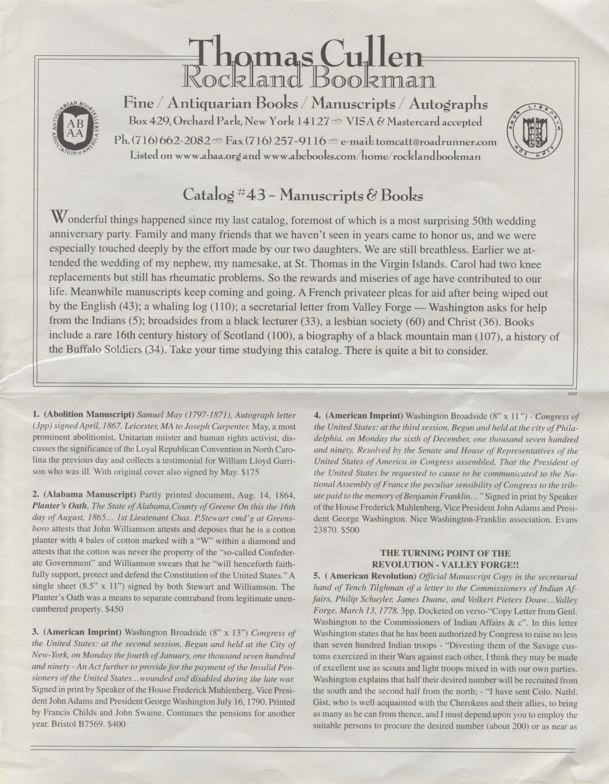 Manuscripts and Books from Thomas Cullen.

Thomas Cullen Rockland Bookman has issued his Catalog #43 -- Manuscripts and Books. There are more manuscripts here, and while there are some very interesting books, we will focus on the manuscript items. After all, they are one of a kind. And, while there are a few exceptions, most fit in the category of Americana or American history. Cullen manages to find some of the more fascinating pieces of American antiquarian history, and this month is no exception. These are some of the items you will find in his latest catalogue.

Item 5 is a manuscript letter from George Washington, handwritten and signed "G. Washington" by his aide Tench Tilghman. The letter is dated March 13, 1778, and was written from Valley Forge, near the end of that terrible winter and the low point of the American Revolution. Washington wrote to the Commissioners of Indian Affairs stating that he had authorized Congress to raise no less than 700 Indian troops. Washington was desperate for more help, and believed the natives could provide some. He wrote, "Divesting them of the Savage customs exercised in their Wars against each other, I think they may be made of excellent use as scouts and light troops mixed in with our own parties." Washington notes, "The Oneidas have manifested the strongest attachment to us throughout this dispute." Priced at $4,500.

Who would have thought that President William Howard Taft, the stuffy, 300-pound President who incensed Theodore Roosevelt so much he ran against his own party, was a humorist? On December 31, 1924, Taft, now former President but Chief Justice of the Supreme Court, writes one Ben Peer Of Honeoye Falls, New York, a thank-you note for a pillow cover. Pens Taft, "You say you are a good old Democrat, but even the worst sinner can return, so we will cherish the hope that you may see the light..." Item 27. $500.

Here is a surprising broadside for 1865: Public Exercises of the Lesbian and Calliopean Societies in the Chapel of the Conn. Lit'y Institute... A public lesbian group in 1865, and carrying on in the chapel no less? Perhaps this is not quite so radical as it sounds. More likely, a "lesbian society" of 1865 was a group of women interested in literature, rather than in...whatever. Probably, it was similar to a "calliopean society," which was a group of people interested in literature, but probably comprised of all males. Indeed, a lesbian society in the "Gay '90s" would have been a literary organization during a happy time. Item 60. $120.

By the time of the Civil War, slavery was a North-South issue, but this was not always the case. Here is an example. Item 93 is a bill of sale for "a black wench named Susan," sold by John Voorhees of Flatlands, Kings County, Long Island, for 90 pounds. The date is November 1799. It was not until 1827 that all slavery was finally abolished in New York. $170.