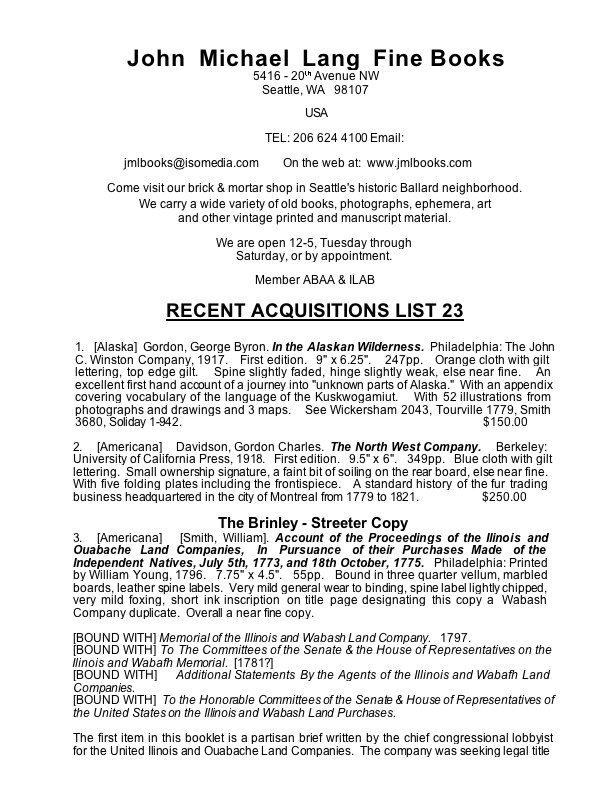 John Michael Lang Fine Books has issued their latest catalogue, Recent Acquisitions List 23. Offered are 31 new-old items, around for a long time though not seen in a Lang catalogue before. Available are items from the 18th and 20th centuries, along with all centuries in between. There are several items from Lang's home in the Pacific Northwest, but others are from as far away as Tokyo, St. Petersburg (Russia, not Florida), London and Paris. In other words, while we can give you a few examples, you will need to see the entire list to understand what is offered, as the subjects are quite diverse. Now here are a few of those examples.

Item 3 is an interesting history concerning land titles in the West during the early days of the Republic. It comes with a fascinating provenance. The book is Account of the Proceedings of the Ilinois [sic] and Ouabache Land Companies, In Pursuance of their Purchases Made of the Independent Natives, July 5th, 1773, and 18th October, 1775 by William Smith. It is bound together with several other appeals to Congress made in 1796 and thereafter concerning lands purchased by predecessors of the Illinois and Wabash Land Companies from various Indian tribes three decades earlier. The validity of these early land titles was subject to dispute, so the company sent Mr. Smith, its agent, to Washington to make its claims. Despite repeated attempts over the next decade and a half, he was not successful. This copy can be traced back to the collection of George Brinley, perhaps the leading Americana collector of the 19th century. It was sold at his auction in 1881 for $23, serious money at the time. We next see it on the market in 1935, when it was sold as part of the collection of Ogden Goelet. Goelet died in 1897, but it took almost 40 years to get around to selling his books. The price was $55. It next went to Walter Hill, and two years later, it was purchased by perhaps the most important Americana collector of the 20th century, Thomas Streeter. It was sold in the Streeter sale of 1969 for $625. Now you can add your name to this illustrious provenance. Currently priced at $5,000.

Item 11 offers a fine press edition of some classic sea charts by one of the greatest of all explorers. Captain James Cook was sent to the Canadian Atlantic coast to chart Newfoundland during the 1760s. He spent several years there compiling a detailed set of maps, which were reproduced in this 1965 edition entitled James Cook Surveyor of Newfoundland, Being a Collection of Charts of the Coasts of Newfoundland and Labradore. This limited edition (365 copies) booklet, including ten separate charts, was produced by the Grabhorn Press of San Francisco. Cook, of course, would go on to conduct his three famous voyages to the South Pacific in the following decade, discovering much about Australia and Hawaii, and putting to rest the long-held theory that there existed a massive southern continent. $600.