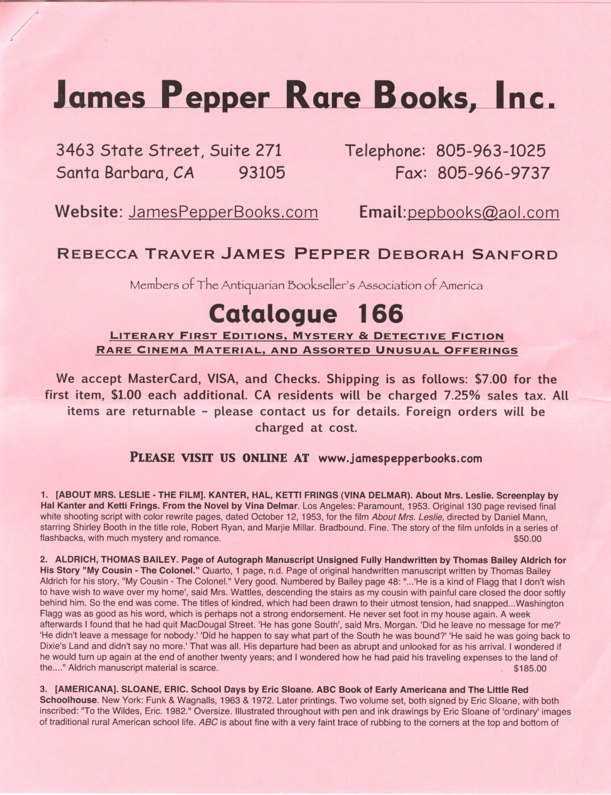 James Pepper Rare Books has issued its Catalogue 166 of "literary first editions, mystery and detective fiction, rare cinema material, and assorted unusual offerings." This catalogue will not surprise, but will certainly please those familiar with Pepper's offerings. The material is similar to other catalogues, but new. It is filled with the names of writers and actors, books and films, that everyone knows. Here is a look inside.

Item 22 is a most interesting first edition of the Cole Porter classic Kiss Me, Kate -- A Musical Play, from 1953. It contains a lengthy inscription from actress Patricia Morison, explaining how she got the leading role. Writes Ms. Morison, "I had been in films for years, and wasn't known as a singer... My manager Wynn Rocamora drove me to Cole Porter's home on Rockingham, telling me that it wasn't really an audition, just to let me get used to singing in front of people. In front of Cole Porter! I was terrified, and sang Rodgers and Hammerstein. He jumped up from the piano and handed me the score of 'Kiss Me, Kate' and 'take it home and learn it' he said. It was a special moment in my life." Special indeed. She sings Rodgers and Hammerstein in front of Cole Porter and gets the job anyway. Ms. Morison's role as "Kate" on Broadway is surely her most notable one in a long career (while no longer acting, she still attends theatrical functions at age 92). Priced at $3,000.

Item 100 is a rare signed and inscribed copy of Eugene O'Neill's last work, A Moon for the Misbegotten. It was published in 1952, the year before he died. This copy is inscribed to his stepdaughter, who assisted him by typing up his manuscript for the play. Writes O'Neill, "For Cyn, whom I regard as a collaborator in this opus...Your admiring Step-Pop, Gene, August 1952." O'Neill's writing career was stopped by a neurological condition which caused his hands to shake violently. Despite this, he managed to sign limited editions of some of his works. However, he was unable to do so with his last book, so that only a few signed copies, inscribed to those closest to him, are to be found. $15,000.

Item 72 ties together one of the greatest writers and film directors of the 20th century. The writer is Sinclair Lewis, author of notable works such as "Elmer Gantry." Offered is a first edition of his 1925 book Arrowsmith. It's the story of a small-town doctor who balances his desire to serve humanity with personal ambitions and opportunities for wealth as he makes important scientific discoveries. It is inscribed to the great director, John Ford, who produced the film adaptation of Lewis' tale. Pens Lewis, "To John Ford, who made the best picture I have ever seen -- 'Arrowsmith' I think it was called." $5,500.

Now it's time to balance the sublime with the tacky. Item 105 is Andrew Morton's Monica's Story, signed by the heroine, Monica Lewinsky. Whatever was Bill thinking? $275.