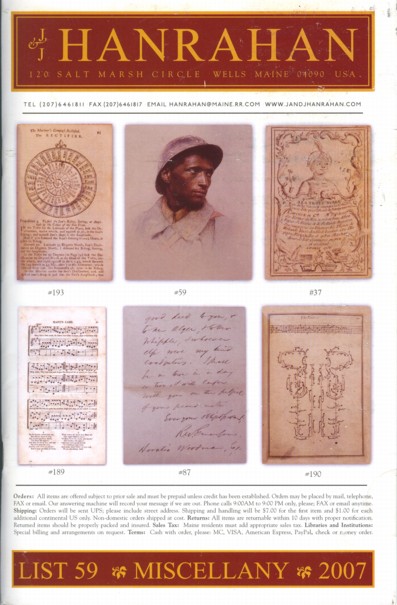 J & J Hanrahan of Wells, Maine, has issued a new catalogue, List 59 -- Miscellany -- 2007. A miscellany can contain just about anything, but the Hanrahans note they specialize in pre-1700 English books, pre-1800 American titles, the American Civil War, Maurice Sendak items, and the White Mountains of New Hampshire and Maine. I'm not sure how to tie all of these together. Perhaps Sendak vacations in the White Mountains. If not, he should. It is a beautiful region. There is a great collection of works featuring the beauty of this land in the catalogue, although more broadly based early Americana comprises the bulk of the offerings. Additionally, there are items that do not fit any of the aforementioned specific fields, so you can search these pages for anything miscellaneous with hopes of fulfilling your interests. Here are some items we found.

Item 15 is an ironic document signed by early patriot and notable grandfather, Thomas Melvill (also "Melville"). Melvill was one of those early patriots who participated in the Boston Tea Party. He served in the Revolutionary War at the rank of major (and in the War of 1812 as well). Between wars he served at the Port of Boston and Charlestown as Inspector of Revenue and was a businessman. This 1799 item, signed Thos Melvill without the "e," certified the legal importation of, ironically enough, a "Chest of Tea." This tea came from Canton, rather than England, so perhaps that was more acceptable. Melvill's grandson was the famous American writer Herman Melville. Priced at $500.

Item 232 is an early physics school book, An Easy Grammar of Natural and Experimental Philosophy... (as if physics was ever easy). This 1809 first American edition was written by Sir Richard Phillips, though pseudonymously attributed to "David Blair." Samuel Allibone provides the classic description of Phillips expertise: "Sir Richard Phillips had four valuable qualities: honesty, zeal, ability, and courage. He applied them all to teaching matters about which he knew nothing..." This copy belonged to one Sarah Kimball of Concord, New Hampshire, and she has signed and dated the book "Nov. 1817." Included with it is a silhouette drawing of Miss Kimball. $350.

Poets may write poetry about topics that are...poetic, but their prose may be more down to earth. Item 87 is a pair of letters to and from Ralph Waldo Emerson. Horatio Woodman, a good friend and perhaps unofficial agent, writes Emerson in 1856 enclosing a check for $772.36 for the latter's lectures. Emerson writes back acknowledging the "astonishing" amount, but says, "I am very heartily bound to you & Mr. Alger, for helping me to this effective way of paying my debts, when the season was over, my debts were not yet paid..." That was a lot of money in 1856, making it surprising that the well-known poet was having such a problem with finances. These letters are tipped into a worn 1857 copy of Emerson's English Traits. $2,000.

Item 50 is a book which is not what it appears. The title is Les Roses, evidently a French book, though no date or author is given. Actually, there is no author. This is in reality a book safe, a large folio size one at that. The center is hollowed out to hide your valuables. In the day, that was probably smart, as few thieves stop to read a book along the way, but with all of today's book thefts, this may no longer be such a good idea. $500.