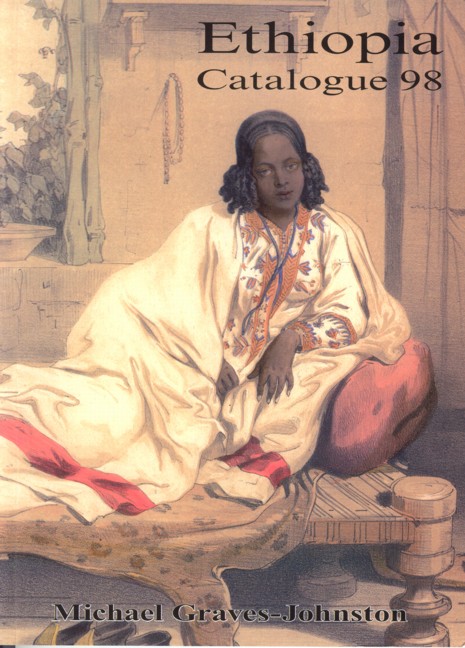 Recently issued was Catalogue 98 from Michael Graves-Johnston, Ethiopia. A catalogue of books concerning Ethiopia and the surrounding countries of Eritrea and the Somalilands. Ethiopia, or Abyssinia, as it was once called, has a remarkable history. Located on the horn of Africa, it is in the area where humankind likely originated. Fossils place humans on the land millions of years ago (compared to maybe 10,000 years for America). Ancient civilizations on the land are believed to have traded with the Pharaohs of Egypt.

By the fourth century, much of Ethiopia had been converted to Christianity. Most contact with Europe was lost during the Dark Ages, but relations were re-established, notably with Portugal, during the 16th century. During the 19th century era of colonization, when most of Africa fell to the control of European powers, Ethiopia maintained its independence.

Ethiopia had several notable strong leaders who preserved its independence. The somewhat erratic Theodore II in the mid 19th century consolidated central authority, Menelik II fought off an Italian invasion late in the 19th century, routing the European invaders. However, no one is more closely associated with Ethiopia in the West than Haile Selassie. In 1935, the Italians attacked from their neighboring colony of Eritrea. This time, the Ethiopians were overrun, despite Selassie's attempts at defense. However, the Ethiopian Emperor became a world figure when, in exile, he spoke before the League of Nations, asking help for his nation. Little was given, and the world's non-response to Italian Fascists would send the wrong message to Mussolini and his German allies in the years ahead.

With British help, Selassie returned to Ethiopia in 1941 and would rule for another three-plus decades. He became a widely respected world leader, but on the heels of a serious famine, he was overthrown by Communist rebels in 1974 and died under questionable circumstances the following year. Worse famine, brutality, and war with Somalia would follow until the Communists were overthrown in 1991. Finally, there would be the war for Eritrean independence in the 1990s before the relative calm of today.

Graves-Johnston's catalogue includes 669 items pertaining to this long history of Ethiopia and neighboring lands, many written by 19th century visitors when Europe was colonizing most of Africa. However, you will find items from most periods of the land's history. Here are a few examples.

For its opening to the West, item 18 is a Narrative of the Portuguese Embassy to Abyssinia: During the Years 1520-1527 by Father Francisco Alvarez. This was translated and printed by the Hakluyt Society in 1881. Priced at £125 (British pounds, or approximate U.S. equivalent of $249).