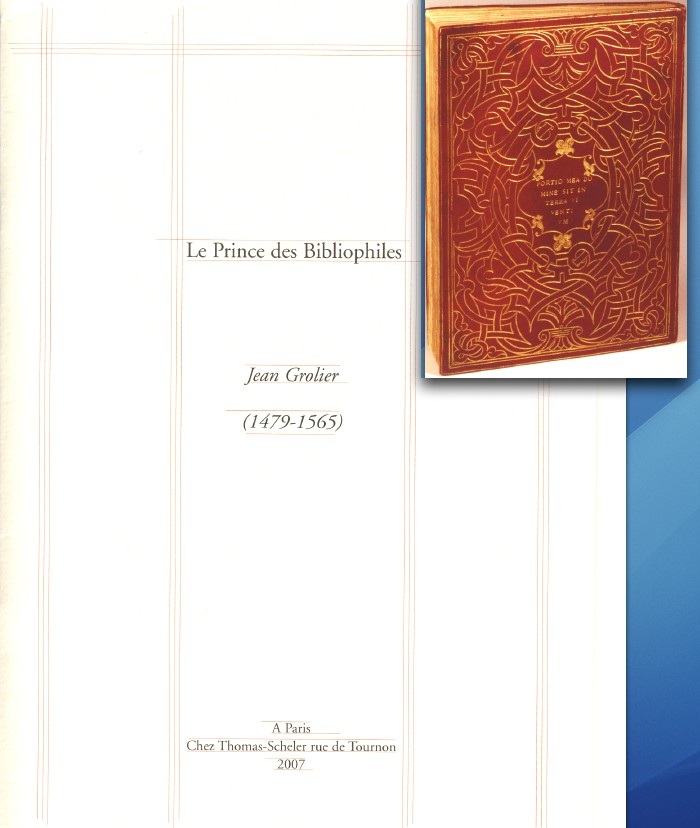 The Grolier catalogue from Thomas-Scheler, with an inset of one of his bindings.

It is not everyday that we receive a substantial catalogue that contains just five items. Here is the exception, and it comes from French bookseller Librairie Thomas-Scheler. It offers five books from the 16th century, classics all as one would expect. However, it is not really the content that makes these books unusual. What is exceptional is the bindings. These books all came from the library of the greatest French collector, Jean Grolier, who housed his books in the finest bindings imaginable. The bindings in his library were so remarkable that Grolier's name has survived the almost five centuries since his collecting days. The notable book collectors' organization in New York, the Grolier Club, is named for him.

The title of this catalogue is Le Prince des Bibliophiles Jean Grolier (1479-1565). Grolier was known as the Prince of Bibliophiles. He was involved in finance and served many years as Treasurer-General of France. He was evidently quite well off financially as his collection attests. It contained some 3,000 volumes, of which around 600 are known to survive today. Grolier's books are noted for their ornamental bindings featuring geometric patterns.

When Grolier died in 1565, most of his books passed down to his son-in-law Meric de Vic, an employee of the King, and then on to his son. They remained together for a century after Grolier's death, finally being dispersed in a great sale in 1676.

While the bindings have made Grolier famous, he was not just interested in books as objects of art. It was his deep respect for the knowledge within that led him to treat them in such a spectacular manner. Grolier was known to give many books to his friends, such was his appreciation of them, along with placing so many in his own library.

The five titles offered by Librairie Thomas-Scheler are as follow:

De Poetis latines by Petrus Crinitus, published in Florence in 1505.

Opera, with works by the Roman writers Catullus, Tibullus, and Propertius, published in Venice in 1515.

De Rerum Natura by Titus Lucretius, published in Venice in 1515.

It is a mark of many fine libraries all over the world to have a Grolier binding in their collection. You can too. For more information and pricing, contact Librairie Thomas-Scheler at +33 (0)1 43 26 97 69, or basane@thomas-scheler.fr.