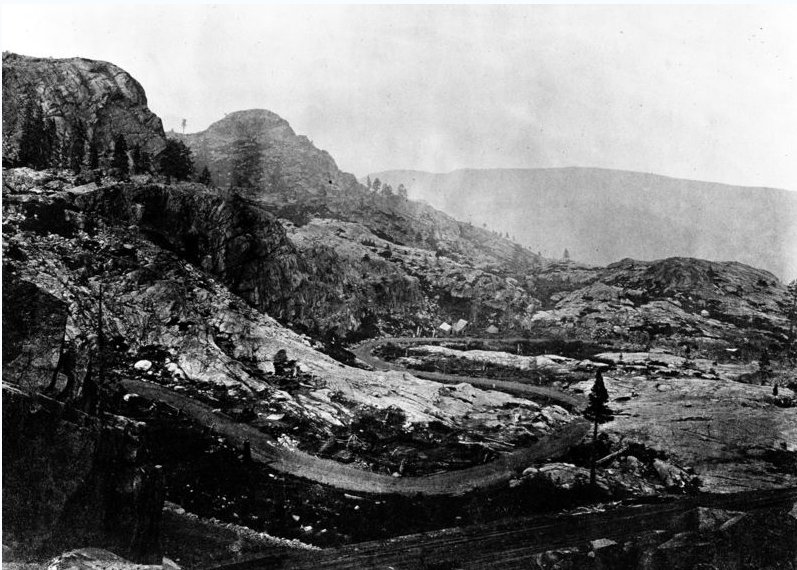 Donner Pass as it appeared at the time McGlashan was writing his account.

Here's one more Custer item before we move on: The Arikara Narrative of the Campaign Against the Hostile Dakotas June 1876, by Orin Libby. The Arikara were Indian scouts who worked for Custer, kemosabes, so to speak. This is an account of the great battle given by surviving scouts many years later, and published in 1920 by the North Dakota State Historical Society. Item 51 is Elizabeth Custer's personal copy of this book, with her signature inside. Libbie Custer was her husband's most loyal and devoted follower. Like the aforementioned Jacob Horner, she outlived Custer by a very long time, but her devotion never wavered. $1,750.

Unlike Mr. Horner, Charles Fenno Hoffman didn't walk west. He rode a horse -- alone -- through what was the West back in 1835 (more like the Midwest today). If riding a horse seems comparatively easy, it should be noted that Hoffman had only one leg, so walking would not have been practical. Item 123 is A Winter in The West By A New-Yorker. Hoffman made it as far as St. Louis, and hoped to continue up the Missouri with fur traders but was not permitted to do so. Hoffman was a writer and journalist as well as traveler, but was best known for his poetry. $160.

William "Buffalo Bill" Cody was an adventurer in the Old West. Cody began working on wagon trains by the age of 11, and went on to be a Pony Express rider, unofficial soldier, Indian scout, and the career for which he earned his nickname, buffalo hunter (to feed soldiers and railroad workers). There were many other activities in which he may have been involved, such as gold prospector, but it's hard to tell where fact turned to exaggeration. However much he may have exaggerated, he was still a remarkable man. Nevertheless, most of his career was spent not on such adventures, but retelling his exploits in his famous "Wild West Show." He turned in his western career while still in his twenties to become a master showman, which occupied almost two-thirds of his lifetime. Item 261 is The Life of Hon. William F. Cody Known as Buffalo Bill, The Famous Hunter, Scout and Guide. This 1879 book, published in the earlier years of his show, would help to build his reputation. $550.

Item 137 is Charles McGlashan's History of the Donner Party. A Tragedy of the Sierras. The Donner party got trapped in the snows of the Sierra Nevadas while trying to cross in 1846, leading to unspeakable horrors. If you don't know what they are most famous for, you are not a Donner collector anyway. With so many stories being told about this tragedy, McGlashan set about to find the truth three decades later. As a newspaper editor in Truckee, California, the closest town to Donner Pass, he had access to the most information. He was able to interview 24 of the remaining 26 survivors before publishing his account in 1879. This rare first edition bears a "Compliments of the Author" inscription. $3,750.

There is, of course, much more in this catalogue, but this should provide a glimpse of the exciting material available. Old West Books may be reached at www.oldwestbooks.com, telephone 817-557-4830.