A Directors' Report from the Arader Galleries 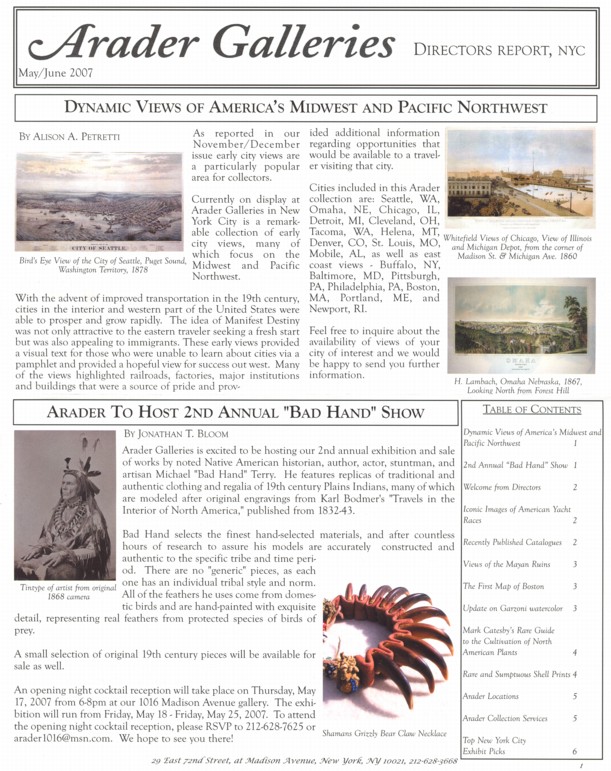 The Arader Galleries Directors' Report for May/June 2007 features a few of the many items they now have available. The Arader Galleries offer a combination of art, books and maps from their six nationwide locations. They are noted for featuring the highest level of material in their fields. Their Directors' Reports, published from New York, are not catalogues, but include general descriptions and explanations of some of their material. The background is always interesting.

Before mentioning some of the items discussed, Arader has some important news for collectors in the Rocky Mountain West. They have just opened a new gallery, their sixth, in Denver, Colorado. It is located in the Cherry Creek neighborhood, at 275 Clayton Street. The Denver gallery may be reached at 303-321-0113. Now for some topics covered.

For Americans thinking of migrating west during the 19th century, one of the most useful promotions were city views, drawings of various cities, often from a "bird's eye" perspective. The Arader Galleries in New York has put together a collection of these images, including both cities in the western frontier and established municipalities back east. Among those cities for which they have views are Seattle, Omaha, Chicago, Tacoma, Helena, Denver, Detroit, Cleveland, Mobile, Buffalo, Pittsburgh, Baltimore, Philadelphia, Boston, Newport, and Portland, Maine.

Frederick Cozzens was a self-taught American maritime artist. He combined a detailed knowledge of sailing ships with artistic talent to create his paintings. In 1880, he was commissioned by the New York Yacht Club to paint six portraits, which led to his focus on racing yachts. Available are several signed prints he created in 1883-84 that were published by Charles Scribner's and Son.

Artist Frederick Catherwood accompanied explorer John Lloyd Stephens to Central America in 1839-42 to investigate various ruins of Mayan civilization. What emerged were 25 illustrations of these ruins as they were when first discovered, prior to later restorations.

Mark Catesby was an English botanist who traveled to America in the early 18th century to investigate the new colonies' natural history. His visits would result in several books on the flora, and later also the fauna, of the colonies. Now available are hand-colored engravings from the 1763 London edition of Catesby's Hortus Britanno-Americanus: or, a Curious Collection of Trees and Shrubs of the British Colonies in North America...

The Arader Galleries have locations in New York (two), Philadelphia, Denver, Houston, and San Francisco. Their website is www.aradergalleries.com, and they may be reached (in New York) at 212-628-3668.