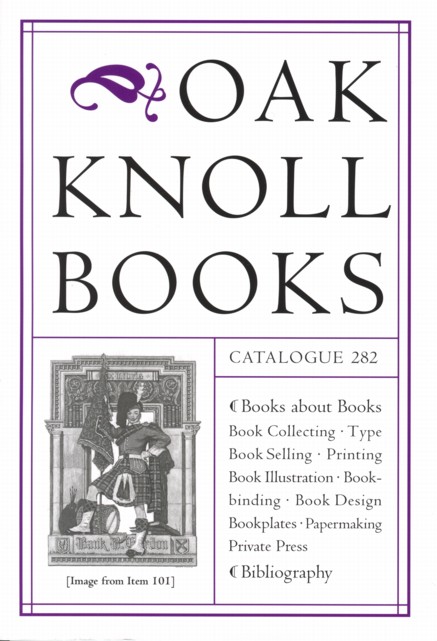 The latest "Books about Books" from Oak Knoll.

From Oak Knoll Books comes their Catalogue 282, containing sections on "books about books" and "bibliography and reference." They define the former as book collecting, type, book selling, printing, book illustration, bookbinding, book design, bookplates, papermaking, and private press. Of course, bibliographies are books about books too. For those whose pursuit of books extends beyond content to their physical being, Oak Knoll shares your interest. This newest catalogue offers 444 items in the field, and here are some examples.

If you collect early French autographs, and aren't sure whether that signed "Napoleon" refers to the early 19th century French emperor or Mr. Dynamite from Idaho, here is a helpful book: Autographie, two volumes from 1864-5. You will be able to check facsimiles of the signatures of the likes of Dumas and Voltaire, and a few non-French speakers such as Dickens. Priced at $475.

Item 213 is one of the famed Christmas greetings from noted collector A. Edward Newton. Newton not only compiled a library of some 10,000 works, but also published numerous books himself, some in short runs for friends, others longer runs with information for collectors. This card was for Christmas of 1920, and includes a picture of a portrait he owned, Death-Bed Portrait of John Keats. Why this would encourage recipients to have a Merry Christmas has been lost to time. Perhaps his friends didn't like Keats. Oak Knoll notes that the card comes in "stiff" paper wrappers, which seems appropriate for a portrait of a dead man. Newton's estate was known as "Oak Knoll." Hmm… $65.

Here is another Newton item. It is the History of Moses by Robert Louis Stevenson. Newton had this edition privately printed in 1919. Not familiar with that one? It isn't one of Stevenson's better-known books, but he cared enough to dedicate the work to his mother. Stevenson wrote this piece when he was six years old. Newton bought Stevenson's manuscript at an auction in 1914. Item 216. $60.

For those who collect books for children, as opposed to those written by them, item 257 is a fascinating and unusual collection. It is a group of receipts, letters, catalogues, etc. that belonged to Henriette Roberts. Ms. Roberts collected children's books in the 1920s and 1930s. This binder full of material will tell what she paid for her books, and includes comments and predictions from booksellers such as E. Byrne Hackett of Brick Row Book Shop (which still continues today though, naturally, under new ownership). $200.