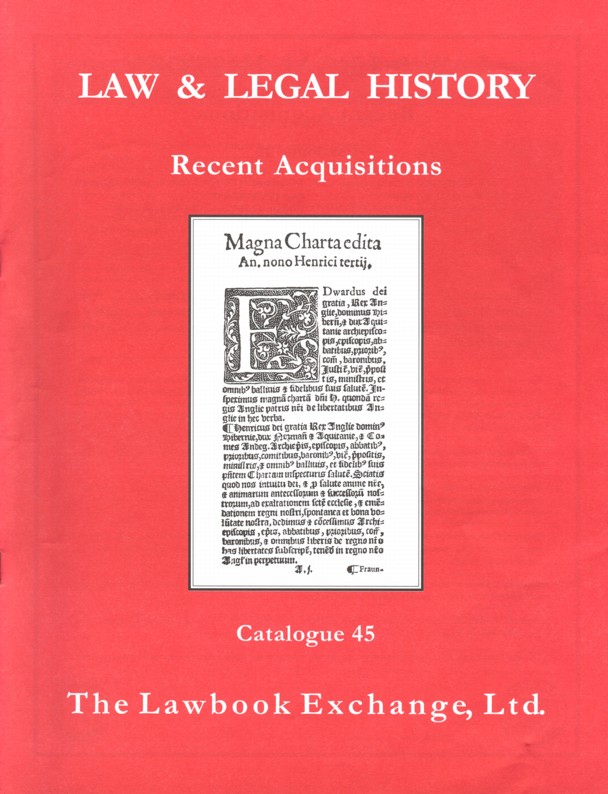 Law and Legal History from The Lawbook Exchange.

We recently received Catalogue 54 of Recent Acquisitions in Law and Legal History from The Lawbook Exchange. This is a collection of works primarily under the heading "antiquarian and scholarly." "Antiquarian" is certainly an apt description as there are a great many which date from the 16th through the 18th centuries. Others qualify well for the sobriquet "scholarly," as they delve into the minutia of some legal topic. We will describe a few of the items available, with a focus on those that may be of interest to both those in and outside of the legal profession, perhaps not always quite so scholarly, but maybe more intriguing to the general public.

What could be a more exciting start than a murder case, especially where the defendant was none other than a man of the Lord, a preacher? Item 111 is the Trial of Rev. Geo. W. Carawan, Baptist Preacher, for the Murder of Clement H. Lassiter, Schoolmaster... Mild-mannered schoolteacher Clement Lassiter disappeared on a cold November day from his rural North Carolina home. Three days later, his body was found in a shallow grave in a swamp. Suspicion quickly fell on the fiery Rev. George Washington Carawan. The most damning evidence came from his slave, who said that Carawan had him assist in hiding the body. However, testimony from a slave was inadmissible in North Carolina courts in 1853. Nevertheless, there was much circumstantial evidence, such as Carawan's fleeing the area after the body was found. A little digging revealed that Lassiter had once been Carawan's tenant, but left after the latter accused him of adultery with his wife. Local officials had ignored Carawan's complaint at the time as he was wont to make such charges, having once claimed as much of his own brother. Still, Lassiter had particularly incensed Carawan by suing him for libel. The Preacher was arrested and held in jail for ten months until the trial began. Carawan hired some of the top legal talent in the state, but all to no avail. He was pronounced guilty, whereupon Carawan rose, pulled out a pistol, and shot the prosecutor. The bullet struck near his heart, but glanced off a locket he was wearing, doing little damage. Carawan then pulled a second pistol, aimed it at his own head, and killed himself. Where he got the guns is unknown. The story, naturally, was a sensation at the time, but time heals all wounds, except those produced by a bullet. Priced at $750.

Here is a murder case that has not been forgotten. The guilt of the accused is still argued today, though item 122 consists of 27 volumes, over 20,000 pages of evidence and conclusions. It is the Investigation of the Assassination of President John F. Kennedy... and the Report of The President's Commission on the Assassination of President John F. Kennedy. Printed in 1964, this massive set is more commonly known as the Warren Commission Report. $1,400.