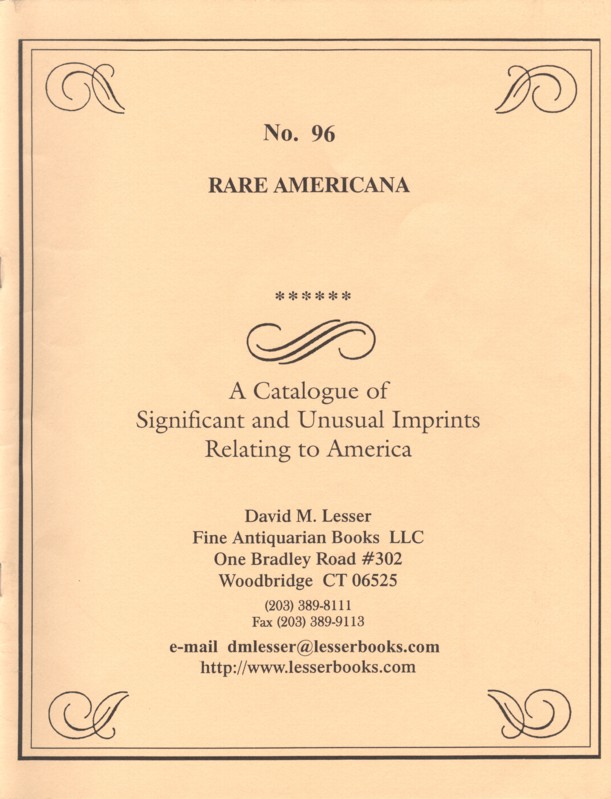 The 96th catalogue from Connecticut bookseller David M. Lesser Fine Antiquarian Books has recently been released. Like other Lesser catalogues, this one is headed Rare Americana. No need to change a title that is perfectly descriptive. David Lesser further describes his material as "significant and unusual imprints relating to America" and this, too, is true. Once again he has put together a collection of the obscure and unusual, and yet many relate to some of the most important events and debates in American history. This is a catalogue for anyone with a love for Americana, great for reading, and great for collecting. Here are just a few of the items offered.

Lesser's catalogues always seem to start with something from John Adams. They are alphabetical in order, and Adams must be the first significant American alphabetically. Item 1 is a Message from the President...Relative to the Requisition for and Delivery of Jonathan Robbins... Robbins was a British seaman who participated in a mutiny in which some other Brits were killed. He landed in South Carolina where he was seized by federal authorities. Robbins argued that he could not be held accountable as he was an American who had been illegally impressed into service by the British. The former colonial masters still maintained at the time that those born in the old colonies could be impressed into the service of the British Navy, which they forcibly did to many American seamen. It did not make the British popular in America. When President Adams turned Robbins over to them, it created quite an uproar. It was likely one of the factors in Adams' loss in the 1800 election. In Adams' defense, Robbins was a liar, an Irishman not an American, and there was an extradition treaty in place. Nevertheless, Adams turning him over to a nation with whom America was in something of a cold war, without going through a court or impartial judge, did not set well with many Americans. As for poor Robbins, he was quickly hanged by the British. Adams' message is priced at $275.

Item 95 was an ignored Speech of [William Pitt]... to His Majesty, to Give Immediate Orders for Removing His Troops from Boston Forthwith, in Order to Quiet the Minds and Take Away the Apprehensions of His Good Subjects in America. Pitt called for the removal of British troops from Boston, the repeal of taxes implemented without the consent of the colonists, and the display of a friendlier attitude towards them. This 1775 speech before the House of Lords was quite ignored, as King George had his own response for the rebellious colonists. It didn't work that well. $2,500.

Edward Rushton was a remarkable English humanitarian of two centuries ago. As a young man, he went to sea, a man noted for his skill and courage. However, a trip on a slave ship appalled him. Unlike most sailors who simply did their jobs, he was horrified by the conditions of the slaves. He became an outspoken opponent of slavery and the impressment of sailors, as well as a supporter of the revolutions in America and France. His role in bringing food to slaves on a ship suffering from the disease of opthalmia led to his own blindness, but not even this inhibited his tireless efforts on behalf of those less fortunate. He became humanity's conscience, challenging even those with the greatest reputations, such as radical reformer Thomas Paine.