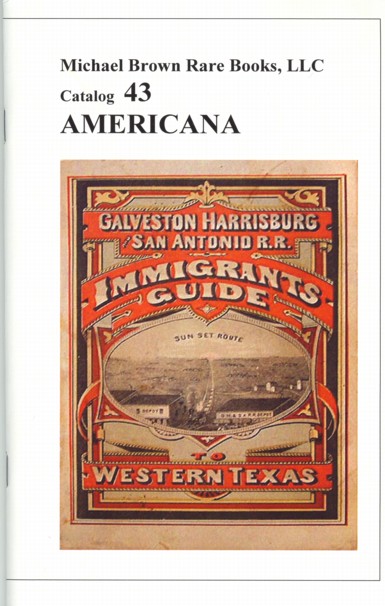 Michael Brown Rare Books recently issued their 43rd catalogue of Americana. This one offers a combination of books and manuscripts, including numerous letters from ordinary citizens dealing with extraordinary conditions, such as war, Indian skirmishes, a gold rush, and living on the frontier in the 19th century. It is hard to imagine how challenging life was in the 18th and 19th century, but these books and letters will help you picture those trying times a little better. Here are a few of them.

Item 37 presents rare first and only printings of the constitutions for the state and territory of Jefferson, in issues of the Rocky Mountain News, from Auraria and Denver, Kansas Territory (Auraria is now a neighborhood within Denver). These issues are dated August 20 and October 20, 1859. Much of today's Colorado was part of the Kansas Territory in the 1850s, a sparsely populated area mainly inhabited by Indians. All that began to change with the Pike's Peak gold rush. Settlers to the area found themselves in a lawless land. Kansas authorities were too busy with the battles of "Bleeding Kansas" to the east to pay them much attention, and federal authorities were likewise consumed with the North-South confrontation leading the nation towards civil war. As a result, some of the settlers took it upon themselves to form their own government. They first attempted to create a state in the area that consists of today's Colorado plus parts of Nebraska, Wyoming and Utah. However, the local populace rejected statehood in a referendum on September 24, 1859. The leaders of the movement then tossed out the state constitution and wrote the second, territorial edition, which was approved by the locals. The government of the Territory of Jefferson, as they named it, operated as the de facto authority in the area until 1861. At that point, Congress approved the formation of the Territory of Colorado, and with that, the government of the unrecognized Territory of Jefferson disbanded. These rare early issues of the Rocky Mountain News, Colorado's first publication, are priced at $20,000.

Item 52 is the London (second) edition of an otherwise ordinary sermon with a most prophetic footnote. It is Religion and Patriotism The Constituents of a Good Soldier. This sermon was preached by Samuel Davies to a group of Virginia volunteers on August 17, 1755, with this edition printed the following year. The prophetic footnote on page 12 reads, "As a remarkable Instance of this, I may point out to the Public that heroic youth Col. Washington, whom I cannot but hope Providence has hitherto preserved in so signal a Manner, for some important Service to his Country." George Washington was 23 years old at the time, and he did have some important service to his country in store. $500.