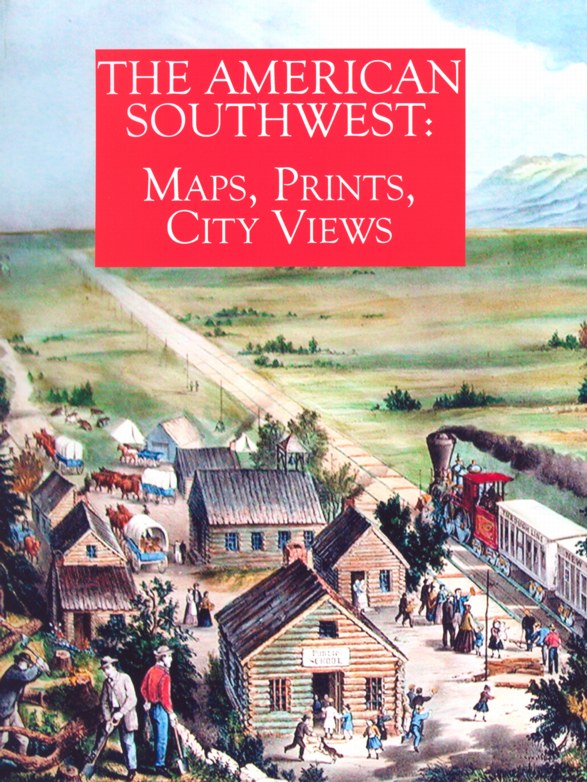 The American Southwest from Arader Galleries.

A truly outstanding collection of The American Southwest: Maps, Prints, City Views has been compiled by the Arader Galleries. This is a catalogue of very important, often extremely rare or one-of-a-kind material. Some items you will almost certainly never find again. They range in date from early expeditions and atlases of the 16th century to some of the more detailed explorations of the 19th. There are works with a Spanish connection -- after all, the American Southwest was once part of New Spain or Mexico. Other works come from French explorers, who generally were found on the more northern edges of the Southwest (Louisiana), but in Texas as well. What the items have in common is they all come from a time when the American West and its inhabitants were still mostly unknown to Europeans and Americans, so they reflect the excitement of discovery in unknown lands. We will describe just a few of the items offered so you will have a feel for the type of material the Arader Galleries has gathered.

Novae Insulae XVII Nova Tabula, Sebastian Munster's first separate map of the Americas, was printed in 1540. While South America is reasonably similar in shape to what we know today, North America is a bit of a stretch. Perhaps the most recognizable feature is the Florida peninsula. The area is labeled "Terra Florida," though as with other early maps, Florida reaches much farther north. A great inland sea, extending all the way from the Pacific almost to the Atlantic is shown. This feature resulted from Verrazzano's misinterpretation of Pamlico Sound. Cuba is accurately named and depicted, but the Yucatan is shown as an island. Japan, or "Ziprangi," is seen as an island off the west coast of North America, rather than the east coast of Asia. A great southern continent can be seen just below the Straits of Magellan. The Victoria, the only one of Magellan's five vessels to make it home, is shown sailing in the Pacific. Priced at $35,000.

By 1548, Italian mapmaker Giacomo Gastaldi was able to give us a more detailed look at Mexico and the Gulf Coast as far east as Florida. This map is labeled Nueva Hispania tabula nova, and while it suffers its share of inaccuracies (the Yucatan is still an island), it names many of the coastal features. Gastaldi based his maps on Munster's work, but added the knowledge gained from the latest discoveries. $35,000.

Fast forward a couple of centuries and we have a most remarkable map of the "internal province," which consists primarily of today's northern Mexico and Texas. This is a hand-drawn manuscript map, in sepia ink, from 1778. Teodoro de Croix was appointed governor of this sparsely populated land in the summer of 1776, as exciting events were unfolding on the other side of America. De Croix set out to survey this unknown land under his command, and took with him surveyor Josep de la Barcanda. On his return, Jesuit Pedro de Ornedo drew this map from Barcanda's surveys. It contains surprising detail about the area, including the cities of San Antonio, Chihuahua, Saltillo and Durango, and displays the roads, such as they were at the time. $550,000.