Books on the American West from Old West Books 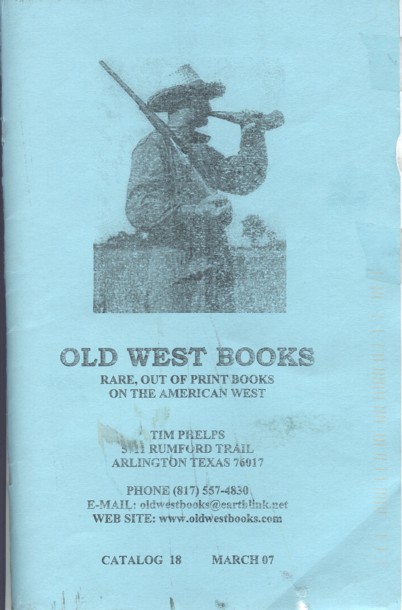 The latest catalogue from Old West Books, looking rather aged itself.

It is a land of legends, one that ceaselessly fascinates us though time has smoothed its rough edges. We have received Catalog 18 from Old West Books, Rare, Out of Print Books on the American West. The catalogue is divided into five sections: Custer; Cowboys, Cattle Trade, Wild West; Gunmen, Outlaws, Lawmen; Fur Trade; and Military/Indian Wars. The overwhelming majority of this material concerns events that took place in the 19th century, though the books themselves are a mix of contemporary publications with more recent retrospectives. In many instances, Old West also maintains reprints of older books for those interested more in reading than collecting. If you are an aficionado of the American West, and it is hard to imagine anyone not so being, you will want to see this catalogue. Now we have a few samples from its pages.

Item 148 is one of the classics of the west, noted for its suppression by wealthy cattle interests. This is Banditti of the Plains or the Cattlemen's Invasion of Wyoming in 1892 by Asa Mercer. This recounts the Johnson County War when wealthy ranchers and their hired guns from Texas set upon their smaller competitors. Their claim was cattle rustling, although it appears that the large ranchers required little evidence before shooting and lynching the small-time operators. Mercer had come to Wyoming to publish a journal on behalf of the large cattlemen's association, but as he witnessed their suppression of small settlers, he turned his pen against his bosses. In 1894, he published this expose, which the wealthy cattlemen, in control of the government, promptly had banned and destroyed. Mercer's printing office was consumed by fire. However, a fair number of copies of his book were secreted away, so that while it is scarce, there are occasional copies to be found. Here is one. Priced at $5,900.

Everyone one knows about the famed Oregon Trail, on which settlers moved from east to west during the 1840s to the 1860s. The opening of the transcontinental railroad ended any need for this torturous route. However, there was a second Oregon Trail, used during the 1870s and 1880s. On this one, traffic flowed west to east, and most of the travelers were cattle, not humans. By this time, cattle were being raised in Oregon, but they needed to be moved overland to Wyoming for further shipment east. Some 100,000 head are said to have been herded along the trail during this period. This story is told by Charles Steedman in Bucking the Sagebrush or the Oregon Trail in the Seventies. This 1904 book is primarily focused on cattle drives in 1878. It is illustrated by noted western artist Charles Russell. Item 165. $925.