Indians and the West from George S. MacManus Co. 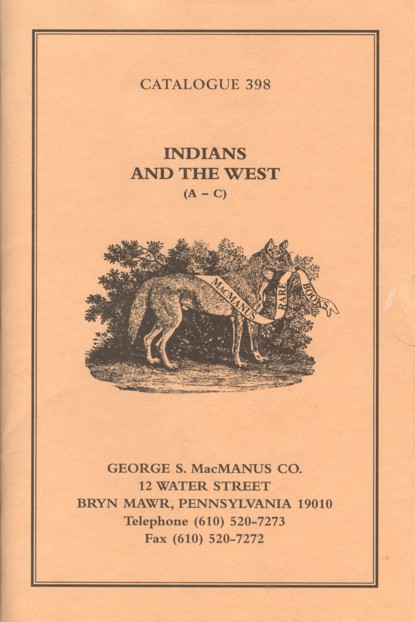 Indians and the West (A-C) from George S. MacManus Co.

We have received the 398th catalogue from George S. MacManus Co. of Bryn Mawr, Pennsylvania. This one will interest anyone who collects the American frontier – Indians and the West (A-C). This catalogue includes 463 items, and as the title notes, it only covers those items categorized under the letters A-C. Evidently, MacManus has much more to go, and I imagine we will be seeing future catalogues in the field. For now, we can say that while this edition will be of interest to anyone who collects Indians or the West, it will be of particular note to those who collect Arizona or California, Indian historian George Catlin, Black man turned adopted Indian Chief James Beckwourth, or anything else associated with the A-B-Cs.

Item 9 is the History of the American Indians...by James Adair, published on the eve of the Revolution in 1775. Adair was an Englishman who came to America and traded with the Indians, particularly those of the South, for forty years. There are extensive sections on the Chickasaw, Cherokee and Catawba tribes, including their customs and beliefs. However, Adair's greatest focus is on his 23 arguments in which he attempts to prove that the Indians were descended from the Lost Tribes of Israel. Adair returned to London in 1768, in time to write his book while avoiding the explosion that would soon rock the colonies. Priced at $4,750.

Item 418 is The Constitution and Laws of the Cherokee Nation: Passed at Tah-Le-Quah, Cherokee Nation, 1839, published in 1840. This came at the end of the most difficult time in Cherokee history. The first Cherokee constitution, patterned on that of the United States, was published in 1828, while the Cherokees were still living on their ancestral homeland in Georgia. In the intervening years, settlers and the State of Georgia would work to remove them from their land, and when President Jackson took the state's side, their fate was sealed. Some Cherokees removed "voluntarily" to Oklahoma, but many were forced on the infamous "Trail of Tears." The split between those who accepted and those who resisted tore the tribe apart, but once all were reunited in Oklahoma, they managed to come back together. This constitution represents that reunion. $2,250.

Here is an account of a journey into the valley of death, quite literally. Item 320 is Death Valley '49. Important Chapter of California Pioneer History... This 1894 title was written by William L. Manly, survivor of a horrific journey when a group seeking wealth in the California Gold Rush decided to take a short cut across the desert to the riches beyond. Exhaustion and starvation were major threats, but none more than thirst. The party, including women and children, found itself hopelessly lost in the unchanging desert. The families began to split up to seek escape on their own. Finally, Manly and another man decided to strike out to find help, successfully making it to the green fields of southern California. Bravely, they returned to the valley, and while expecting all must have perished, they did find two surviving families they escorted to safety. It was this party that gave the region its unforgettable name, "Death Valley." $600.