The Private Press of Rollin Milroy from Wessel and Lieberman Booksellers 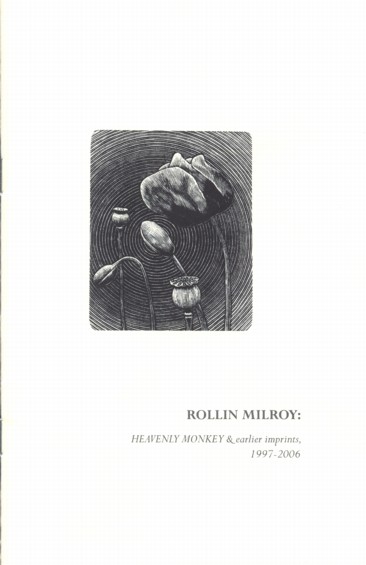 A collection of works from the presses of Rollin Milroy.

For those who collect the private press, Wessel and Lieberman Booksellers has issued a pamphlet on Rollin Milroy: Heavenly Monkey & earlier imprints. 1997-2006. Milroy operates a private press, with the emphasis on traditional book crafts in publishing, rather than high volume. These are books meant to be appreciated for their artistry as much as their words. Milroy has published very limited editions for the past decade primarily under the Heavenly Monkey name, and before that, under the Lone Press imprint. You aren't likely to find many of these Vancouver, British Columbia, imprints in your local bookstore, particularly if you are not from the Northwest. However, Wessel and Lieberman have resolved that issue with this catalogue. As Millroy's work is all relatively recent, it's hard to know how collectible it will become. Traditional, high quality material can become very desirable over the years, and these works are both early in his career and printed in very short runs. Certainly if you ever wish to collect this fine work, there will never be a better time, as these rare items are still available at reasonable prices. That may not be the case much longer. Here are a few of the 33 items currently available.

Item 4 is A Short Story of Science Fiction by Anthony Burgess. This book was published in 1999, still under the A Lone Press imprint. It includes an original wood engraving by Shinsuke Minegishi. It is one of but 36 copies issued as a Christmas gift to friends and family. Priced at $100.

Item 9 was printed for Wessel and Lieberman in 2000, the first from the Heavenly Monkey press. It is a previously unpublished poem by Washington State poet Samuel Green, What the Fisherman Knows. Only 75 copies were printed, in celebration of Spring 2000. $35.

Item 8 was Milroy's first printing, as the 704 Press, Concrete Inspection, by Crispin Glover. This was actually printed at Barbarian Press in 1997. It is Milroy's first letterpress work, published in just twelve copies. $125.

Item 14 is an unusual item, An Invitation to British Columbia: A letter from T.E. Lawrence to Martin A Grainger. This 2005 Heavenly Monkey imprint published for the first time a letter from Lawrence written in 1929. Lawrence, better known as Lawrence of Arabia, had been invited by Grainger to settle down in British Columbia. Why is not clear. Perhaps Grainger figured Lawrence was sick of hot, dry places, and British Columbia is certainly the un-desert. He guessed wrong. Lawrence declined the invitation in this letter, which is why we don't remember him as Lawrence of British Columbia. This is one of 50 copies (of a total run of 70) signed by Jeremy Wilson and Don Stewart, who provided the preface and forward. $400.

Item 22 is A Christmas Secret from Heavenly Monkey. This is one of "a few dozen copies" published for family and friends at Christmas 2002. Wessel and Lieberman tell us this is the only place Milroy explains where the name "Heavenly Monkey" came from, but they do not provide the answer. You'll have to buy the book. $100.

Wessel and Liberman Booksellers may be found online at www.wlbooks.com, or reached by telephone at 206-682-3545.