A Sold Out Catalogue from deHartington and Weiss 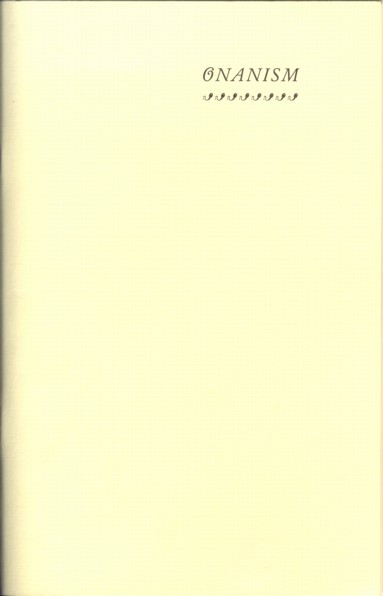 The thankfully unillustrated catalogue on onanism.

Here is a catalogue unlike any others we have reviewed. It is unique both for its subject and the fact that it is the first catalogue which sold out before we even received it! More about that and the buyer later on, but first we take a look at the catalogue itself. It is offered by Michael DeHartington of London and Burton Weiss of Berkeley. The title is simply Onanism. For most, that term probably is not understood. Those who know are smirking.

The subheading enlightens us: The masturbation panic 1756-1973. It must have been serious, as that's an awfully long time for a panic to go on. Actually, you might think a topic like this would not have been discussed that much in public. You would be wrong. As this catalogue elucidates, the topic was the subject of much discussion, or at least of much literature. Why is a mystery. For whatever reason, the practice became a sin in the eyes of prudish theologians and others, which in turn led to a field of quackery "science" which attempted to convince young people it would result in all sorts of medical catastrophes. Of course there was no evidence for this, but as with patent medicine, no evidence was required. So, we have this body of literature, designed to scare people, either with quack medical claims or hellish theological threats. Of course, none of this had any impact, people behaving as they always did, but it is still interesting to listen to the hysterical writers tilt at their chosen windmill. Here are a few samples from these works.

Pastor Sylvanus Stall attempted to instill fear in the hearts of young men in 1897 in What a Young Man Ought to Know. Along with undermining physical powers, destroying health, and bringing on ruin, regret and remorse, Stall informs his readers the "evil practice" can, "in some instances bring softening of the brain, weakening the intellect, and convert its unfortunate victim into an imbecile, thus preparing himself either for the insane asylum or an early place in the cemetery." One wonders if this was the cause of Stall's own imbecility.

While young men were usually the target audience for these publications, women were not spared. Augustus Gardner, an MD no less, informs us in Conjugal Relationships as regards Personal Health... (1918), "much of the worthlessness, lassitude and mental and physical feebleness attributable to the modern woman are to be ascribed to these habits as their initial cause." I always wondered what made modern women this way.

As long as we are picking on women, another MD, John Cowan, in The Science of a New Life, quoting a Dr. J.C. Jackman (seriously), observes, "I never knew a girl to eat lime off the wall, or to chew up her slate-pencils, who was not to a greater or less extent a victim of this practice." Come to think of it, I have never known any girls who ate lime off of walls who weren't either. Is this why they call the British limeys?