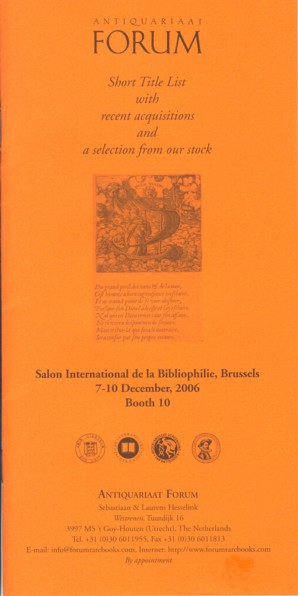 Items taken to the Brussels book fair by the Antiquariaat Forum.

The Antiquariaat Forum of Utrecht issued a Short Title List of works they brought to the recent Salon International de la Bibliophilie held in Brussels. This is a collection of antiquarian works, most at least several centuries old, including a few of incunabula, and a manuscript that predates printing. This is a not a list designed for those on a tight budget, but for those who collect early European items, particularly from the Low Countries and the Continent, and those of the highest order, the Antiquariaat Forum has your books. Here are a few examples of what they have to offer.

He may have been a bit late to develop the reputation of a Captain Cook, but Louis de Freycinet did some of the most extensive explorations of the Pacific as yet seen in the early 19th century. He was equally as thorough in keeping records of his discoveries whether in the natural sciences, astronomy, geography, meteorology or ethnology. From 1817-1820, the French navigator sailed the Pacific, visiting South America, Australia, and many islands in between, Hawaii included. While he made few discoveries of new land, the thoroughness of his reporting remains his great contribution. It took Freycinet twenty years, from 1824-1844, to publish all of his reports covering his three-year trip. Item 21 is that complete collection, Voyage autour du Monde, nine text and four atlas volumes. Priced at €143,100 (Euros, or approximate US equivalent of $189,106).

Item 55 includes a copy of Gerrit de Veer's Diarium nauticum, published in 1598. This is the first Latin edition of this work covering the first three Dutch voyages attempting to find a northeast passage to China. These voyages were commanded by Willem Barentsz, but the book was written by De Veer, a carpenter on board. It is fortunate that de Veer kept a diary to recount the voyage, as Barentsz died on the last of the trips. They made it as far as the island of Novaya Zemlya, but ice prevented their ever traveling farther. De Veer's book is bound with de Houtman and Lodewijksz's Prima pars descriptionis itineris navalis in Indian Orientalem, another 1598 work which described the first Dutch journey to the East Indies. €52,470 (US $69,072).

Item 7 is a bit pricy, but it is a spectacular set for anyone who collects maps. It is a 1667 second issue of the French edition of the Blaeu atlas Le grand atlas... This has been called the greatest of all atlases as it was thorough, quite accurate for its time, and beautiful. This copy has been finely colored in a contemporary hand. The Antiquariaat Forum states, "A better and more desirable copy has not been on the market for decades." There are 596 engraved maps and plates in its 12 folio volumes. €795,000 (US $1,046,572).

Speaking of maps, item 20 includes 80 colored manuscript maps and plans of fortified towns and castles compiled in an atlas. Most were drawn prior to 1629. Most of the places depicted are from the Netherlands, but there are also examples from Germany, France, Italy, Belgium, Poland, Brazil and Malta. €174,900 (US $230,251).

You can find many more of the items the Antiquariaat Forum currently is offering on their website, www.forumrarebooks.com. Their telephone number is +31 (0)30 6011955.