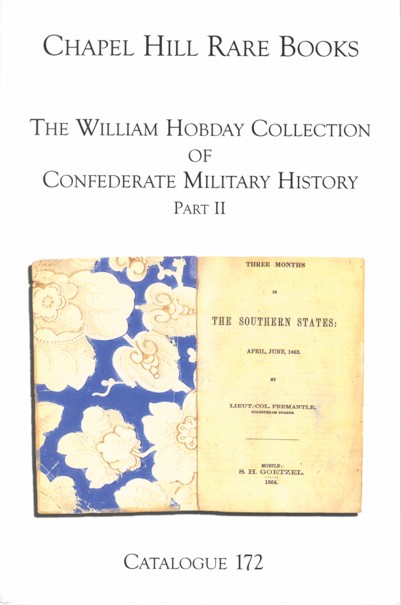 Part Two of the Hobday Collection of Confederate military history.

Chapel Hill Rare Books has now issued Part II of its catalogue of The William Hobday Collection of Confederate Military History. The first section of this extensive collection was covered in Part I of the Hobday catalogue last fall. Offered are all types of accountings of the Civil War, or "War Between the States" as the Confederates preferred to call it (or "War of Northern Aggression" as they really liked to call it). Some of these books are well-known histories, some are biographies of notable leaders. However, the majority were written by participants not so well known, often foot soldiers of the war who felt compelled to tell their stories late in life. The result is that many bear dates from around the turn of the century, when the old warriors realized time was running out on their chance to preserve history.

Most of these books may not appear totally impartial, particularly to a Northerner. Though their cause was lost, few Confederates ever changed their minds as to the rightness of their cause. One of the great things about America is that they remained free to argue for it, even after their guns were long silenced. The losers in America's Civil War likely fared much better than will the eventual losers of civil wars in places like Iraq and Lebanon. Here in the Hobday Collection you will again hear the Confederate soldiers, officers, and historians, fighting one last time for the South, not as young men with rifles, but as old men with pens. Here are a few of the notable and obscure titles awaiting the Civil War Between The States collector.

The Rise and Fall of the Confederate Government is an obvious cornerstone to a Confederate collection, though perhaps not an unbiased view. The author of this 1881 history was Confederate President Jefferson Davis, and his book has been described more as an argument for secession and state's rights, a book that perhaps conceals more than it reveals. Certainly Davis was an unreconstructed Confederate to the end, though it would not be unfair to say that any superiority the South enjoyed in its military leaders was not equaled by its executive leadership. Two copies are offered, item 56, priced at $850, and item 57, priced at $500. For a sympathetic look at Davis, there is Jefferson Davis, Ex-President of the Confederate States of America, a Memoir, by his wife, Varina Davis. Item 59. $450.

Stand Watie was the only Indian on either side to rise to the level of Brigadier General during the Civil War. Watie was long a controversial but influential leader among the Cherokees. He signed the agreement to turn over ancestral lands in Georgia to the state, earning the wrath of the majority of his tribe which resisted, and eventually was forced to Oklahoma, many dying on the way. Watie and his followers were there already, and he was lucky to escape assassination once the others arrived. In time those wounds healed, but the Civil War would again split the tribe. Watie, a planter and slaveholder, was sympathetic to southern values, and joined the Confederates. He rose to the rank of general, mainly fighting pro-Union Indians, but helping regular forces as well. He became the last Confederate general to surrender, finally conceding defeat some three months after Appomattox. Item 5 is Mabel Washbourne Anderson's The Life of Stand Watie: The Only Indian Brigadier General of the Confederate Army and the Last General to Surrender. Ms. Anderson has signed this scarcely found 1915 first edition. $500.