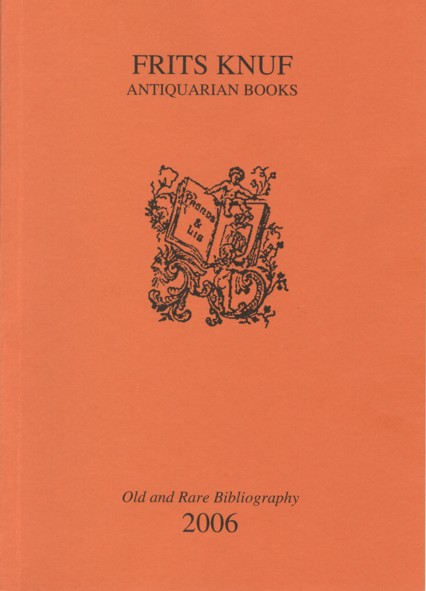 The most recent catalogue from Frits Knuf Antiquarian Books has just arrived in the New World. Knuf is a Vendome, France, bookselling firm that specializes in antiquarian books (with an occasional more recent title thrown in). Thankfully, for this reviewer, they offer catalogues in English. Many of their offerings are books in English, though various continental languages are present as well, notably, because of the age of many works, Latin. The subject and title of this latest collection is Old and Rare Bibliography 2006.

While the general topic is bibliography, that term may imply a more restrictive group of offerings than are actually presented. This is not just a catalogue of standard type bibliographies. There are numerous auction catalogues, lists of books banned by the Church in prior centuries, library catalogues, items on printing, type, and bindings, and even a treatise on paper-eating insects. This catalogue is definitely more expansive than the term "bibliography" might imply. Here are a few samples.

It is appropriate to begin with a classic book on bibliography and the book arts,The Bibliographical Decameron by Thomas Frognall Dibdin. Dibdin was that early 19th century book enthusiast whose passion for the field set the tone for generations of obsessive collectors to come. In this 1817 first and only edition, he espouses on various topics relating to the book through a course of discussions by imaginary persons. The three volumes include numerous fine illustrations. A few days after publication, Dibdin got a group of friends together and burned the engraved blocks he had used. His explanation was that he wanted to assure that the copies published would always retain their value. Item 23. €1,600 (or US equivalent of approximately $2,102).

Item 4 is the Indenture of Apprenticeship of 19th century publisher George Bentley. Bentley signed on to a seven-year apprenticeship with his father's firm (the document is signed by both Bentleys) at the age of 14. George would go on to run the firm in his adulthood, but after his death, his son sold the company to Macmillan's. In his commitment, Bentley agrees to the terms of the indenture, including "shall not commit Fornication, or contract Matrimony within said Term," nor "play at Cards, Dice, Tables, or any other unlawful Games," nor "haunt Taverns, or Play-houses." Evidently young Bentley, really, really wanted to be a publisher. Either that or these things were more honored in the breach than in reality. €1,150 (US $1,511).