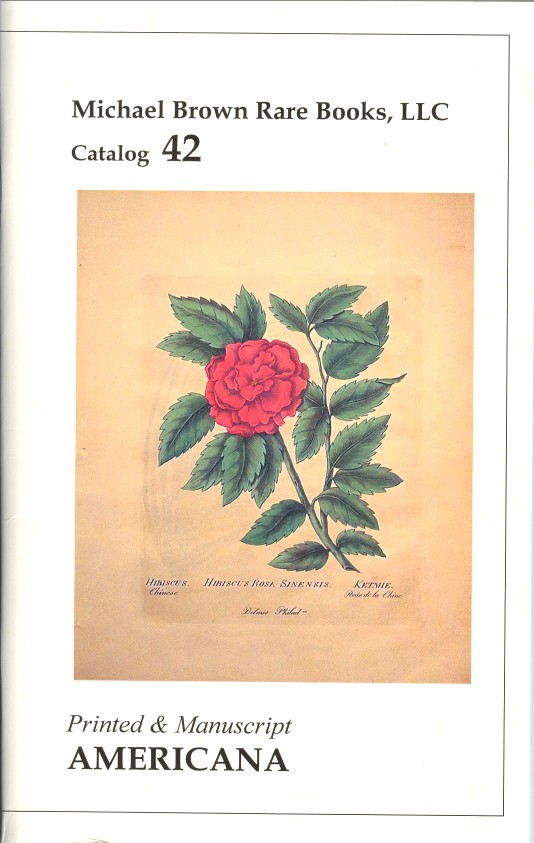 Michael Brown Rare Books of Philadelphia recently issued their catalogue number 42 of Printed and Manuscript Americana. This catalogue contains over 200 items either from or related to America, mostly from the 18th and 19th centuries, with many manuscripts interspersed with the printed material. All sorts of topics of interest to early Americans are covered: politics, religion, travel, railroads, local information, Indians and Indian captivities, war, slavery, farming, gold, education, real estate, along with an occasional book of poetry or a eulogy. Whatever you collect, if it's a subset of Americana, there is probably something in here you will want. Now for a few samples.

Here is an obscurity any American, Texans in particular, will appreciate. It's Sam Houston and the People, an 1856 song sheet promoting Houston for president. The sheet was published, not in Texas, but in New York. The movement to draw Houston into the race as something of a compromise candidate never got off the ground. In ways he resembled the very successful candidate from 1848, Zachary Taylor. Like Taylor, he was a southerner and a slaveholder, and yet he was also an unwavering Unionist and one who opposed the extension of slavery into the new territories. It was a compromise that worked in 1848, but not 1856, and Houston would end up being removed as Texas Governor five years later for refusing to swear loyalty to the Confederacy. Houston predicted a disaster for the South. "Then pull off your coat and roll up your sleeve, Sam and the people are a coming!" They never came, but the horrible bloodshed Houston predicted did. Item 91. $150.

Item 53 is an exceedingly rare American color plate book, Collection of Flowers, Coloured Drawn from Nature by L.F. Delmes, Drawing Master... The circa 1830 book states that it was sold by Delmes and at "Mrs. Cantelo's Corset Warehouse" in Philadelphia. This is apparently the third book in a series of three. Only one other copy is known (as part of a complete set of three), now held by the Library of Congress. It does not show up in the expected reference works. The book includes eight engraved hand-colored plates of flowers - acacia, corchorus, houstonia, hoya, hibiscus, Spanish broom, nerium and lead wort. One of these drawings is featured on the cover of this catalogue. $7,500.

It was described as America's Dreyfus Affair. His name is now mostly forgotten, but Oberlin Carter was once the man expected to build the Panama Canal. A combination of unfortunate events and political intrigue instead turned him into a federal prisoner. The man who graduated number one at West Point in 1880 would spend most of his life just trying to regain his reputation. Politics can be an ugly game. Carter was an Army engineer, a man who built an outstanding reputation for his project to clear Savannah's harbor. He was appointed to a committee to evaluate routes for the canal, with two routes under serious consideration, one through Panama, one through Nicaragua. Two events would conspire to destroy him.