Actors, Celebrities and Others from James Pepper Rare Books 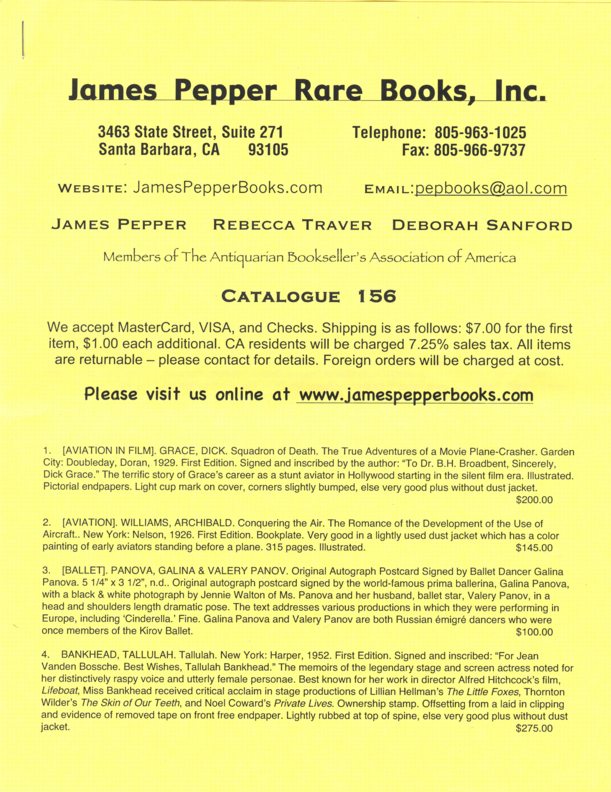 This month we review our first catalogue from James Pepper Rare Books of Santa Barbara, California. This is an intriguing group of books, but Pepper does not provide us with a theme for the catalogue. So I'll have to figure it out. Here we go. Most of these works are in some way related to actors and films, and those that are not still are generally connected to some type of celebrity. One more common string that runs through a great many of the works is that they come signed or inscribed. Now these are not rules. There are exceptions. However, this does appear to be the focus of this collection which bears only the title Catalogue 156. Here are some examples of what you will find inside.

It was perhaps the greatest work ever of animated art. The film, that is, as the book could hardly be animated. However, the book comes with numerous striking illustrations, and while it also lacks a musical score, it does come with a forward by conductor Leopold Stokowski who provided the film with its music. The book, published in 1940, is Walt Disney's Fantasia, and this copy was inscribed to someone named "Barbara" and signed by Disney himself. Item 32. Priced at $7,500.

It is always tragic to see celebrity romances fall apart, but it is even more heartrending when the couple has been together for some 40-plus years. Such was the sad fate for Barbara Millicent Roberts and Ken Carson. Perhaps you don't recognize their full names. You may simply call them Barbie and Ken. Back in 1962 when they were still truly young, rather than forever young, Cynthia Lawrence wrote the book Barbie's New York Summer. It undoubtedly recalls a wonderful, romantic summer, something I will claim based on my knowledge of the characters and 1962, never having actually read the book. This copy is signed, though unfortunately not by Barbie or Ken, but by the book's lesser-known author. Item 6. $200.

Buddy Ebsen appeared in many movies from the 1930s until the 1990s. He almost made the big time early in his career when he was cast as the Tin Man in 1939's The Wizard of Oz. Unfortunately, Ebsen became seriously ill from the aluminum dust in his outfit, and had to be replaced. Still, this role is featured in his autobiography published many years later in 1993: The Other Side of Oz. An Autobiography. He would return to appearing in many obscure movies until almost securing the lead role in Disney's Davy Crockett, an enormously popular television show with children in the 1950s. Alas, that role went to Fess Parker, and Ebsen had to settle for the role as his sidekick. However, he landed the minor role of Doc Golightly in Breakfast at Tiffany's and this led to the one for which we all remember him -- Jed Clampett in the Beverly Hillbillies. Item 37 is a signed copy of Ebsen's autobiography. $45.

Item 69 is an odd coupling -- horror writer Stephen King and New Orleans jazz musician Pete Fountain. Offered is a first edition of King's first book, Carrie. Evidently Fountain must have liked it, as this copy contains his bookplate and signature. If there is any other connection between these two, I am unaware of it. $2,500.

Here is another odd couple, though this time there was a real connection. This couple is writer W. Somerset Maugham and speechless actor/harp player and Marx brother Harpo Marx. These two actually became good buddies. They were introduced by another writer, Alexander Wolcott, and for whatever reason, the two just hit it off. The clowning relationship might be expected of Marx, but Maugham? Item 87 is a copy of Maugham's Ah King from 1933, inscribed, "For Harpo Marx, W. Somerset Maugham, grateful to him for a world of fun." The bookplate includes a drawing of Harpo by his wife Susan. $9,500.