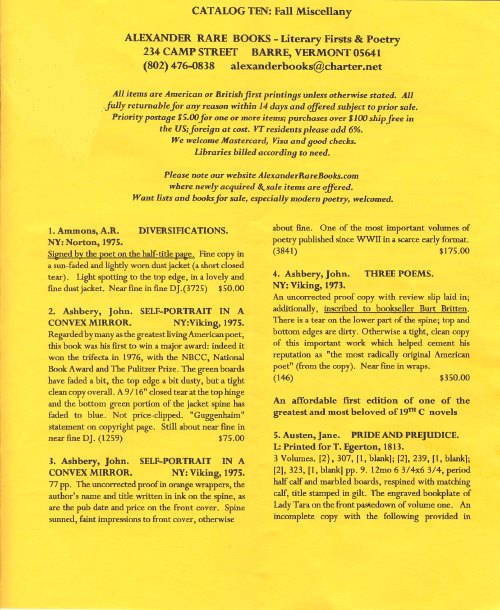 Literary Firsts and Poetry for the fall.

"It is a truth universally acknowledged, that a single man in possession of a fortune, is in need of a wife." No. He is in need of some books. That's why we, and Alexander Rare Books, are here. Alexander's latest catalogue, Number 10 of Literary Firsts and Poetry, quotes the first lines of several of the works they offer. I will admit to not being as familiar with fields such as 20th century poetry to identify most of these, but even I was able to match this one up with Jane Austen. Perhaps that is because she, like I, have been around quite awhile. Of course, she is with us no more, but to quote Mark Twain, "Every time I read 'Pride and Prejudice' I want to dig her up and beat her over the skull with her own shin-bone." Fortunately, most of the books in this catalogue were published after Twain's own lifetime, so he cannot offer literary criticism. You will need to look through this catalogue and provide your own. Here are a few of the books you will find.

The aforementioned Pride and Prejudice is here, and the chance to obtain an affordable first edition painfully leads us to another Twain quote: "Why I go so far as to say that any library is a good library that does not contain a volume by Jane Austen. Even if it contains no other book." Twain would be horrified by the amount people pay today to maim their good libraries with Austen's work. We have seen copies of this book go for tens of thousands of dollars at auction. This three-volume 1813 first edition does have some pages in facsimile, which makes it available for the much less daunting $7,000. Even Twain would have appreciated a bargain like that! Well, maybe not.

"A thing of beauty is a joy forever." Can you identify this one? I will not answer whether I could connect that familiar line with its source, but for those uncertain, the answer is Endymion by John Keats. Keats lived at the same time as Austen, but as best we can tell, never offended the sensibilities of Twain. His epic Greek poem, Endymion: A Poetic Romance, was published in 1818. This was just the second book by the 22-year-old poet, and while certain political connections led to some unfavorable reviews, this work sealed his reputation as a major writer. That was fortunate, as Keats did not have a lot of time. Shortly after the poem was published, Keats began showing symptoms of tuberculosis, which had stricken others in his family. He managed just one more work containing his well-known odes before dying at the age of 25. Item 60 is a first edition of Endymion, priced at $5,500.

Item 27 is the rather obscure second book by E.L. Doctorow, Big As Life. It would not be until his third book, "The Book of Daniel" in 1971, that Doctorow would begin to receive acclaim. Big As Life is something of a science fiction tale, set in New York. Evidently, Doctorow did not care that much for his second novel. You will have to buy this first and collectible edition if you wish to read it, for Doctorow has not allowed it to be republished since. It is, naturally, his scarcest book. $375.