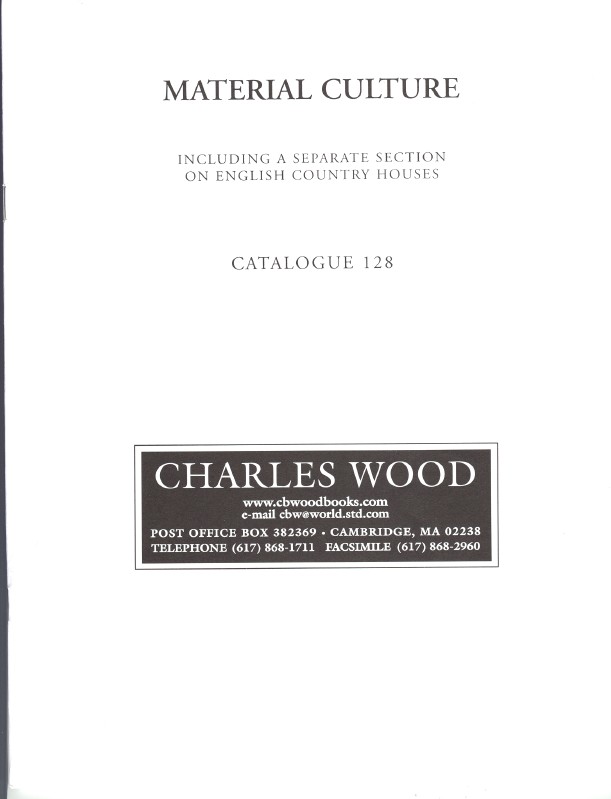 The title of the latest catalogue from Charles Wood is Material Culture, with the subheading, Including a Separate Section on English Country Houses. This really is a two-in-one catalogue. The first half is focused on the fine material arts, while the second part centers on what the British call "country homes." There are no log cabins in this group.

The first section covers material arts, such as furniture making, silver smithing, guides on manner and dress, how to be a good servant, instructions on dancing, jewelry design, and more. These are primarily 18th and 19th century books, so the quality of workmanship, or expectations of good manners, was a bit more demanding than it might be today. For some reason, as technology made it easier to make things, the quality became worse instead of better. That isn't easy to explain, but these works will take you back to the standards of a different era.

Richard Brathwaite provided guidelines for the lord's servants in his Some Rules and Orders for the Government of the House of an Earle... This book provides instructions for all domestic officers, such as the gentlemen ushers, preacher, gentlemen of the horse, secretary, gentlemen waiters, groomes of the bedchamber, yeoman of the pantry, etc. You probably have some of these positions available in your own home, though they may presently be vacant. There is even a marshal of the hall, which I guess is something like the hall monitors they used to have in high school, but a lot classier. It must have been nice to be an English nobleman in 1821. Item 1. Priced at $350.

Here is an interesting look at personal transportation in the days before the automobile swept across America. The book is Carriage-drafts selected from the New-York Coachmakers' Magazine and The Hub. It includes drawings of 500 styles of carriages. They cover all types, from coal-box wagons and business wagons to hearses. The days were numbered for these horse-drawn devices when this book was published in 1873, but it was still too early for the carriage makers to see what would soon be coming down the road at them. Item 4. $1,900.

The second part of the catalogue takes on the English country house, or in American, the castle. Maybe they aren't all castles, but some are, and the rest are not what people on this side of the Atlantic usually think of as country homes. These are the types of houses where you really would have needed a hall marshal to give you directions.

Evidently it was common for wealthy folks to print guidebooks to their homes in the 18th and 19th centuries. Some must have been open to public tours, or perhaps the owners just wanted to show off. A book would be printed for a particular country estate, and it would show the various rooms, furniture, gardens, and whatever other luxuries it possessed. These books give us a unique look at how the other half lived in another time.