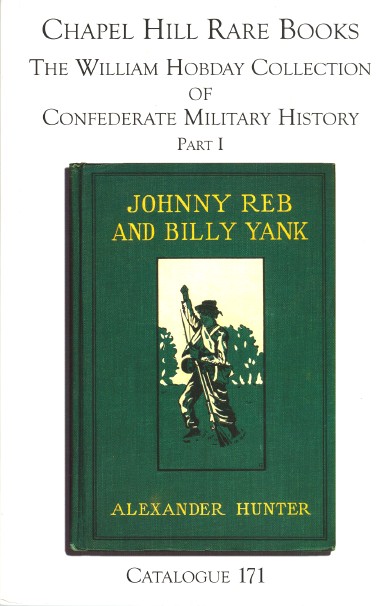 Chapel Hill Rare Books has just issued one of the finest catalogues of America's Civil War we have seen in awhile. Offered is The William Hobday Collection of Confederate Military History Part I. Obviously, this is only part of the collection, and the focus is primarily on the views of one side in this great struggle. Nevertheless, this is a magnificent collection, 300 works that touch upon the war as seen from the Confederate point of view.

There are biographies of noted southern generals and the like, but the largest number of books in this collection were written by the more common participants. They include lower to mid-ranking officers, foot soldiers, even wives back home (and in some cases, home was a moving location as families sought to avoid the ravages of war). The number of books written by those who participated in this war is surprising. At times it seems like just about everyone who carried a rifle and lived to tell about it wrote a book. Of course that's not true, but many did, and their recollections tell the reality of this terrible struggle better than the more scholarly examinations of the battles and strategies that were later produced.

The dates of these books are also telling. Most were not published in the days following the war. They are dated from the early 20th century, or perhaps late in the 19th. The war was by then already three, four, even five decades in the past. What you see here are old soldiers, knowing that their days are numbered, attempting to preserve their experiences and memories while they still could. Many were evidently encouraged by family members to preserve their recollections. Since most were not famous, not a Robert E. Lee, Jefferson Davis, or Stonewall Jackson (they were all long gone by this time anyway), their histories were not bestsellers. Most were printed in short runs, with circulation only intended for friends, family, or perhaps others who served in the same battalion. The result is that these books, uncommon even when published, can be quite rare today. Finding this deep a collection of reminiscences from the Confederate side is undoubtedly unusual. If this fits your field of collecting, you will definitely want to see this catalogue. Here are just a few of the titles available.

Item 52 is a later book than most -- 1979 -- but it consists of letters written from the frontlines from 1861-1863. The book is Dear Bet, and it contains letters between Lieutenant Sidney Carter and his wife Ellen ("Bet"), back home in Cartersville, South Carolina. Carter relays day-to-day life for the soldiers as they move from one battle to the next, Manassas, Harpers Ferry, Fredericksburg, Chancellorsville, and finally Gettysburg. There the letters stop. We all know why. Carter was one of six brothers to fight for the Confederacy. Only three returned. The sadness of separation and knowledge that he might never return is clear in the letters, yet so is his sense of duty. In typical fashion, Carter signs off a letter with, "Kiss all the children for me. Tell the negroes howdy and accept all my love for yourself." Indeed, while he was fighting for slavery, he expresses nothing but affection for the "Negroes," likely the slaves back home. One can only wonder why so many good and caring people could not see. That would have saved them from marching off to their deaths, leaving their families without sons, husbands and fathers. If only, from hindsight, we could speak to people like Sidney Carter. Priced at $75.