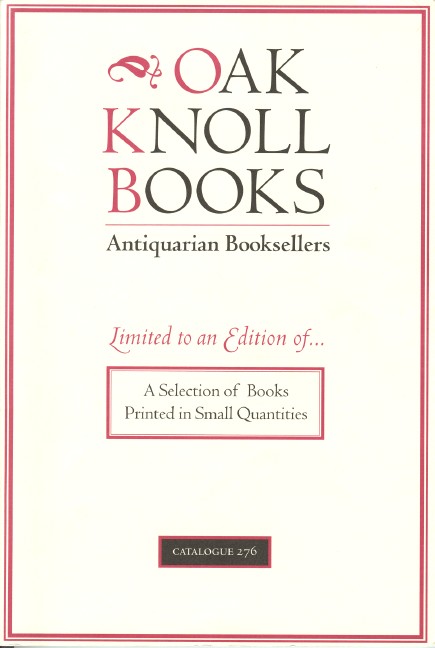 Oak Knoll Books has published a catalogue for those who collect limited or small-run editions. With the title Limited to an Edition of ...(A Selection of Books Printed in Small Quantities), it is limited to books with original print runs under 250. These books are by definition scarce, having been uncommon from the day they were printed.

Now, some of them were printed in very short runs for good reason. Their topic may be of only specialized interest, their subject may be of virtually no interest (boring), they may be of interest only to a particular small community, club or family. However, the largest part of these short-run books were printed in small quantities because they came from private presses. This catalogue will be of as much interest to those who collect the private press as those who collect limited editions. Over the past century, the private press has become the major source of high quality printing as well as limited editions. Oak Knoll's latest catalogue is filled with works run off of these small presses.

The names represented in this catalogue are something of a who's who of the private press, along with a "who's that?" of private presses, many being small and obscure even by private standards. Many of the better-known private presses are represented, such as Grabhorn, Golden Cockerel, Bird and Bull, Red Ozier, Whittington, Tern and Incline. Others are perhaps not so well known, like Previous Parrot, Inky Parrot, Woolly Whale, Weather Bird, Black Sparrow, Lark Sparrow, Doves, Heron, Catfish, Boss Dog, Katydid, Rampant Lions, Swan, and Tiger. Naturally, you will find a few items published by the Oak Knoll Press as well.

There are also numerous publications of book collecting societies. Among those whose publications are offered are the Grolier Club, Zamorano and Roxburghe Clubs of California, the Philobiblon Club, the Quarto Club, the Rowfant Club of Cleveland, the Pittsburgh Bibliophiles and the Baltimore Bibliophiles. Following are a few of the nearly 800 uncommon items being offered by Oak Knoll Antiquarian Booksellers.

Item 458 is an item described by Oak Knoll as "one of the earliest examples of private press printing in America." The book is The Epithalamium by Joannes Secundus, and the publisher of this 1856 reprint was The Press of Bizarre, located in Philadelphia. Only twenty copies were printed, and this is one of but three on large paper. Adding to the rarity is that this was the only book from this press, whose owners must not have become wealthy for their efforts. They also published a magazine called the Bizarre, between 1851 and 1855. This book certainly is a rarity. Priced at $2,000.