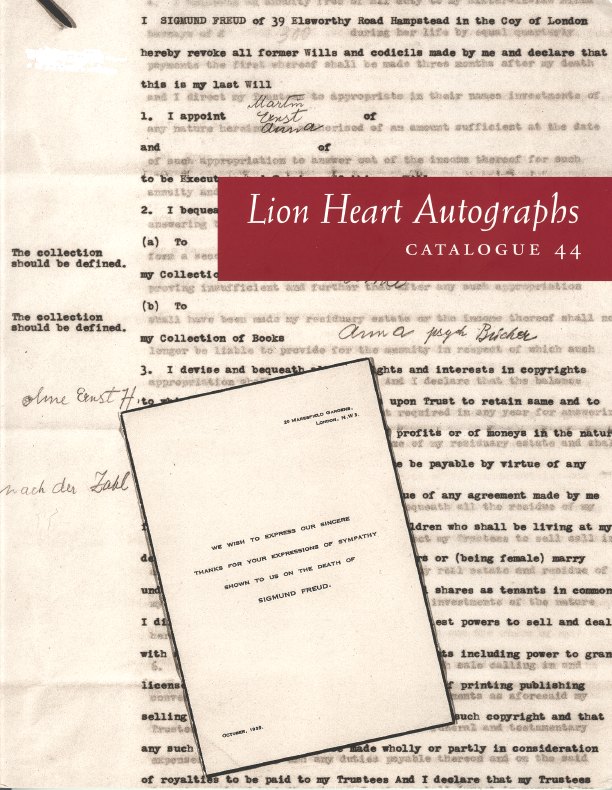 This month we received our first catalogue from Lion Heart Autographs. What is offered, naturally, is one-of-a-kind material, autographed, usually with an inscription. The autographs come from the pens of various famous people. Artists, writers, musicians, political leaders, scientists, businessmen are among those who put their names to paper, and all are notable within their fields. Often, the pieces are lengthy and complex letters, revealing interesting insights into the minds of the writers. Lion Heart has presented a most thorough catalogue. They quote extensively from the longer letters, and provide backgrounds into the life of the artist or other person who signed the piece. This catalogue is an education, as well as a source of some wonderful material.

There are very many letters and other signed documents from famed musicians. Not to be a namedropper, but here are a few: Stravinksy, Caruso, Armstrong, Strauss, Gershwin and Gershwin, Brahms, Ravel, Rachmaninoff, Wagner, Mendessohn, Schumann and Puccini. Representing literature there are Dickens, Wordsworth, Wilder, Le Carre, Christie, Shaw, Tennessee Williams and Henry Miller. A separate section of the catalogue is devoted to F.C. Schang's collection of artists' letters, including names such as Picasso, Dali, Chagall, Cezanne, Toulouse-Lautrec, Whistler, Remington, Pissarro, Monet, Manet, Renoir, Matisse, O'Keeffe, and Mount Rushmore sculptor Gutzon Borglum. There are political leaders, Napoleon and Josephine, Napoleon III, George III and George IV, Danton and Robespierre from the French Reign of Terror (the latter represented by a drinking poem he wrote!), Franklin Roosevelt, Truman, Clemenceau, Rochambeau, and Zapata. From science and medicine there is Marie Curie and the Mayo Brothers. Psychology is represented by Freud and Jung. Business offers Hearst and Baruch, the latter represented by a most interesting response to the virulent anti-Semitism of Henry Ford. Acting has Isadora Duncan and Sarah Bernhardt. Mutineering has William Bligh, and for the sucker born every minute, there is Phineas Taylor (P.T.) Barnum. Here are a few specific examples.

Ernest Hemingway was a tough guy, but even he was pushed to his limit in 1954 when he was involved in back-to-back small airplane crashes in Africa. In his inimitable style, he writes eldest son John, "Liver and kidney (right) were busted liver damaged with spleen right kidney ruptured and intestine collapsed etc. And have lost a lot of blood and am bloody weak and have to get the gen and build up. Had to fight a brush fire on the coast and got 2nd degree burns legs, abdomen, chest, etc. and 3rd degree left hand right forearm." He then goes on to point out, "No son of a bitch is indestructible." In a postscript, "Papa" discusses his "paralysis of sphincter" and more scatological details of this problem, but if you want to know about this, you will have to buy his letter, or at least get a copy of the catalogue. Item 42. Priced at $5,800.