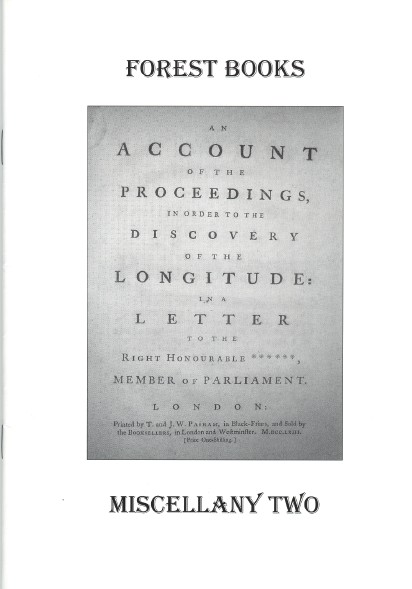 The latest from British bookseller Forest Books is not dedicated to anything in particular. It is Miscellany Two, and as the title implies, there are many different types of items here. The common threads are British and old, 19th century and earlier. There are many titles I found intriguing, and I suspect you will too.

Among the titles are quite a few from the late 18th, early 19th century pertaining to homes for the poor and mentally ill ("lunatic" asylums as they were referred to in the day). I was surprised by the number. It is doubtful that they provided what we would think of as first-rate care today, but it is still kind of surprising how much effort was made considering the limited resources and wealth available at the time.

Among the other types of works that have multiple entries in this catalogue are those dealing with domestic affairs - cooking, maintaining the household, dressing properly and the like. There are a good many books or just broadsheets of poetry. These are not the works of "great" poets, but ordinary people, who had something to say, and said it poetically (though necessarily all that well). Poetry was obviously more popular in the days before television and the internet. Of course there are lots of religious tracts, a few political, scientific, mathematical and much more. Here are a few examples.

Item 39 commemorates a humanitarian step forward, the end of an abominable practice. The title is The Sweep-Boys Song on the Abolition of Chimney-Climbing. In the days before poles and chimney brushes, young boys were given the job of fitting their small bodies into chimneys and cleaning them. The soot and grime was horrible, and the rough surfaces in the chimney would scratch and scrape them. The practice was finally abolished in 1840, and this broadside poem was printed to commemorate this glorious occasion. "No more shall his knees and his back be made raw, As many a time they have been, When forced his small body through small flues to draw; Such dreary work never was seen." Dickensian England was not always a pleasant place. Priced at £45 (Or U.S. equivalent of approximately $86).

Item 6 is an interesting treatise, The Family Magazine: in Two Parts. Published in 1741, part one provides advice on cooking, housekeeping, making wine, and various domestic activities. Part two is devoted to medicine, which Forest tells us is something of a horror show. They explain, "The treatment for appendicitis is to apply a live puppy to the naked belly and follow up with a cataplasm of rotten apples or of sheep's dung boiled with milk." Where did anyone ever come up with this "cure?" Did they actually try it, and if so, what possessed anyone to try this procedure in the first place? And, did they actually get a positive result? With all due respect to author Arabella Atkyns (said to be a pseudonym), if the need ever arises, I'll go for the appendectomy. £795 (US $1,512).