The South, Slavery, and More from David Lesser Antiquarian Books 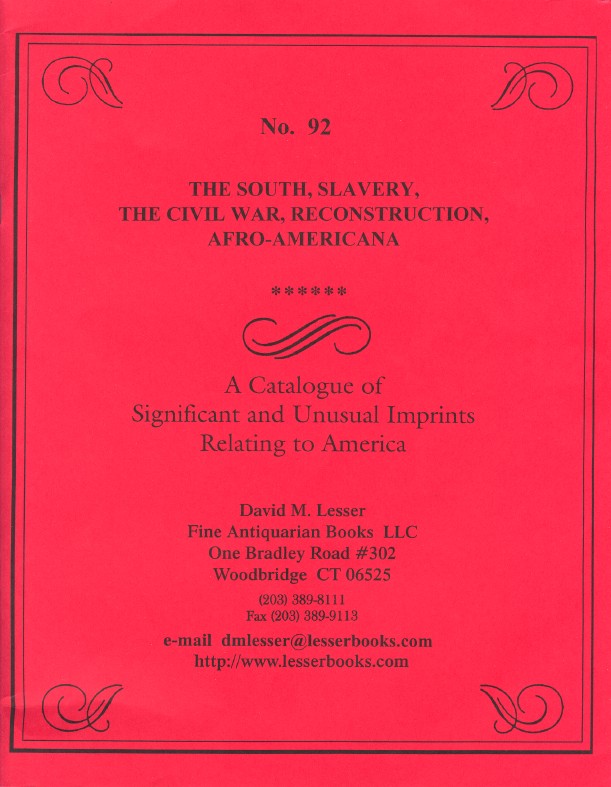 The latest catalogue from David Lesser Fine Antiquarian Books is headed The South, Slavery, The Civil War, Reconstruction, Afro-Americana. Lesser has a knack for finding material that truly reflects its time. This catalogue is filled with the debates that took place in 19th century America, and many pertained to the most contentious and difficult issue the nation faced - slavery. The ringing words of northern abolitionists, the increasingly strident defenses of the "peculiar institution" from the South, and even the pleas of the middle-of-the-roaders who tried to find some sort of compromise, are all heard in these documents. As you read through the descriptions of so many of these works, it is hard not to feel the impending doom, a nation headed toward a cataclysmic disaster, a split so deep that nothing but brute force could ever resolve the differences. Lesser offers not just a collection of books, but a look at America dealing with an irresolvable conflict. Here are a few examples.

Item 7 is a perverse message of "hope" for slaves written by Thomas Bacon in the colonial era. It would be here reprinted in 1842 for the "Society for the Advancement of Christianity in South Carolina." The aim of this so-called "Christian" society was to convince slaves that it was in their own best interests to passively accept their fate. The book's title is Sermons by the Rev. Thomas Bacon, of Maryland, First Published in 1763. On the Duties of Servants. Bacon's thesis was that slaves were serving God just as well as the most important of leaders, and God appreciated their labors equally. Nonetheless, being slaves was the role they had been called to, and therefore they should obediently serve their masters as they would serve God. "Poor creatures! You little consider, when you are idle and neglectful of your master's business...what faults you are guilty of towards your masters and mistresses are faults against God himself." Unlike the typical slaveholder, Bacon educated his slaves, quite progressive and humanitarian for his era, and yet he hoped to use that education to convince slaves to be accepting of their status, rather than seek freedom. Priced at $500.

Popular sovereignty was a pre-war doctrine made famous by Stephen A. Douglas, Abraham Lincoln's noted protagonist. In the two decades before the Civil War, the burning issue was whether slavery would be permitted in new states being formed in the West. Popular sovereignty would have allowed residents of these states to decide for themselves, thereby avoiding rancorous fights in Congress. However, while Douglas is most associated with the principle, it was the basis of Lewis Cass's 1848 candidacy for the presidency. Democrat Cass, like Douglas, hoped to be all things to all people with this compromise. However, Whig candidate Zachary Taylor did Cass one better in being all things to all people, simply refusing to enunciate positions on the major issues of the day. Voters on all sides of the spectrum could imagine Taylor shared their own views, so they elected him over Cass. Item 39 is General Cass on the Wilmot Proviso. Cass opposed the Wilmot Proviso, which would have banned slavery in territories obtained from the Mexican Cession, in favor of popular sovereignty. His position antagonized many northern Democrats, some of whom defected to the new Free Soil party, helping assure Cass' defeat. $350.