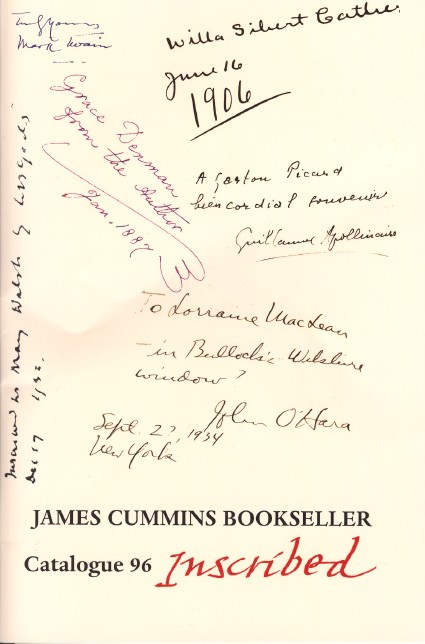 The 96th catalogue from James Cummins Bookseller is entitled Inscribed. This is a collection of just over one hundred works that have been inscribed, most often, though not necessarily, by the author. The greatest number of the books are literary works, but again, not all. There are artists, poets, actors and politicians who have put their names and comments to these pages. For those who collect just a bit more than the printed word, Cummins has a catalogue for you. Here are a few examples.

Ernest Hemingway was undoubtedly still very much in love with second wife Pauline Pfeiffer in September 1928, when he inscribed a copy of Grabados y Litografus de Goya to her. It is a book which reproduces Francisco de Goya's drawings. They had been married less than a year, and Hemingway was still a struggling writer at the time. Ms. Pfeiffer, on the other hand, had a healthy trust fund and a doting uncle who purchased a Key West home for the couple. She was a magazine writer and editor herself, and she captured the heart of "Papa" while the latter was still married to his first wife. States his inscription, "Pauline Hemingway with love from Ernest." Of course those with a roving eye tend to rove again, and in time Pauline too would be replaced by a younger, third (of four) wife. They were divorced in 1940. Item 41 is the Hemingway inscribed Goya to Pauline. Priced at $6,000.

Charles and Jane Engelhard were wealthy benefactors of numerous causes, and friends with some of the leading politicians of their day. Jane, born in China, had married Charles, a wealthy industrialist, in 1947. Among their friends was President Lyndon Johnson, a man as colorful as Hemingway. LBJ sent copies of books to both of his friends, The Vantage Point, which he authored, to Jane, The Professional. Lyndon B. Johnson, by William S. White, to Charles. In a tipped in card to Jane, Johnson, in typical style, inscribes, "For Jane Engelhard. My dear friend-Counselor-Companion and Sweetheart whom I deeply love." To Charles, he writes, "To Charles Engelhard -- with best wishes." Well, we can see which of the two LBJ liked better! Item 49 is the book and card to Jane. $1,500. Item 50 is the book for Charles. $1,000.

In 1975, Mrs. Engelhard would accompany Senate Majority Leader Mike Mansfield on a trip to China to help the government formulate foreign policy. Mansfield would present her with a copy of their report - China: a Quarter Century after the Founding of the People's Republic. Mansfield was a great mind, though not quite the charmer that LBJ was. His inscription is appreciative and friendly, though not quite so familiar: "To 'China Born' Jane B. Engelhard, who did so much to make the mission to China worthwhile ... With my deepest personal thanks & appreciation to a great & knowledgeable lady & associate." Two different styles. Item 60. $1,000.