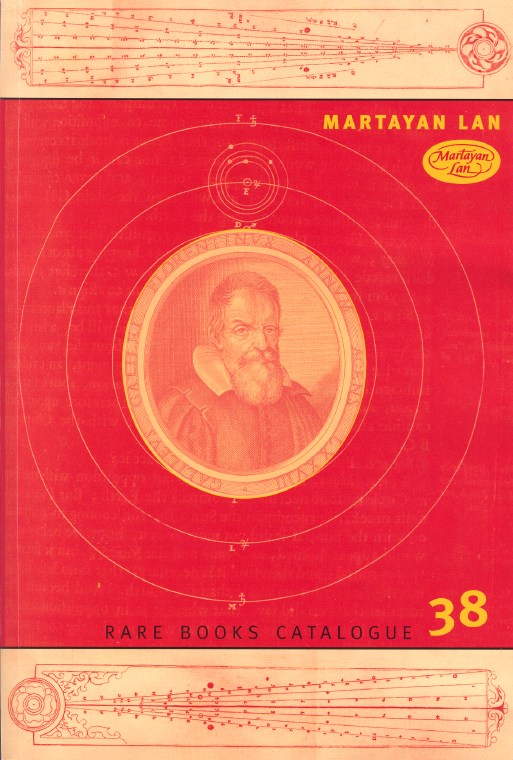 Martayan Lan is known as one of the premier map sellers in the world. Therefore, it was a bit of a surprise to receive their 38th catalogue. It is titled simply, Rare Books Catalogue. That it is. Not the usual collection of maps and atlases we expect from Martayan Lan, but an outstanding collection of rare, and generally very old and important books. The catalogue is broken down by subjects, with the following covered: travel, geography, voyages, astronomy, physics, mathematics, medicine, natural history, arts and humanities. This collection is appropriate for those who collect at the highest level, and who focus on earlier books, incunables to the 18th century in particular. Such collectors may not normally think of Martayan Lan as a resource, but they would be wise to get a hold of this catalogue. It is right up your alley.

Martayan Lan starts with two items that are not typical of the remaining 165, being a bit much for even most upper tier collectors. However, they are such seminal works to the European discovery of the rest of the world that it is hard not to mention that copies are herein available. Item number 1 is Epistola Christofori Colom, better known the Columbus Letter. As all Americans certainly know, Christopher Columbus sailed on his epic journey of discovery in 1492. On his way back, on February 15, 1493, he is said to have penned three copies of this letter. At least one copy made its way to the printer. Many "editions" were printed, including this, the second from Stephan Plannck of Rome in May 1493. It told of "Indians," as the geographically confused Columbus described them, both the friendly and savage types, and about the abundance of gold and other resources. It was a message that would stir great excitement, and in time, totally change the world. At least eleven editions of the letter were published in 1493, eight in Latin (as is this one). However, the printings were not as substantial as full-length books, and most disappeared. Only around 80 copies of all editions of this, the most important document concerning the New World ever published, are known to still exist. Price available on request.

The second item of extraordinary importance is a copy of the anonymous first printed instructions (published in Nuremberg circa 1505) on how to round the Cape of Good Hope and sail to India. This is only the third known copy. Vasco da Gama had first made the journey in 1499, but he published no accounts. This document provides specific directions, including ports of call and distances along the route. It includes one of the earliest maps showing an open sea below the southern tip of Africa. $650,000.

Item 40 is another hugely important work, but this time in the field of science. It is a 1632 first edition of Galileo's Dialogo. This was the work in which Galileo promoted the Copernican system, in which the earth revolves around the sun, rather than the other way, considered by many to be heresy at the time. Galileo presents both points of view in the form of a dialogue between each side's defender, but his bias towards a sun centered system showed through. Galileo was condemned by the Church and placed under house arrest the remainder of his life, but his views would eventually prevail. $68,000.