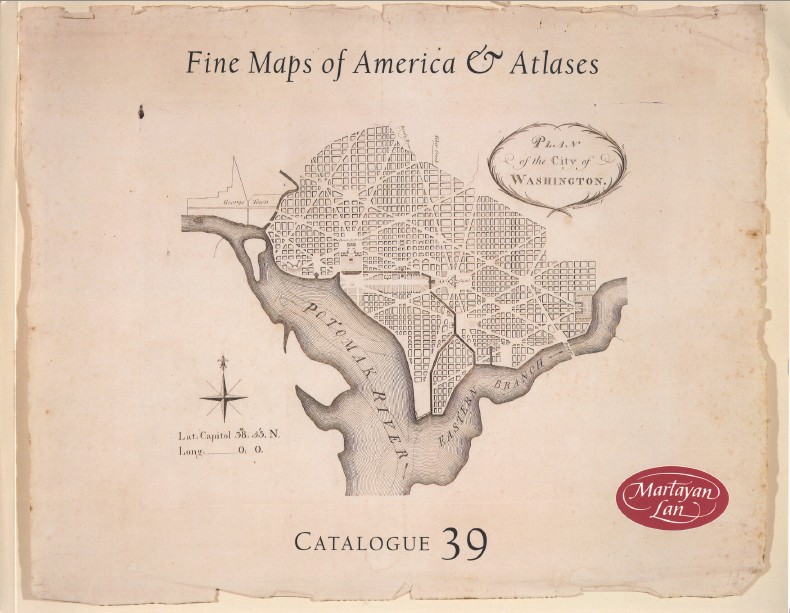 New York map seller Martayan Lan has issued a catalogue of special interest to collectors in the field of Americana. Catalogue 39 is called Fine Maps of America and Atlases, and if you are planning a cross-country trip, what is offered herein won't be of much help. The newest maps are from the 19th century, while most are older. A few go back as far as the early 16th century, when the pilgrim's landing was still a century away. The North American continent turned out looking much different from what was once believed, so following these will surely get you lost. Nonetheless, these maps provide a fascinating look at history, as European explorers slowly figured out what this new, large landmass really looked like.

As you look through the evolution of maps offered, you will find New England and Florida to be among the first areas to be mapped in forms reasonably similar to what we know today. The entire Atlantic coast filled in quickly. The Pacific coast took much longer, as it was less frequently explored. It was not until a few decades into the 18th century that depictions of California as an island finally disappeared. On many maps, the entire Northwest was simply a blank slate.

The most difficult areas to map were those of the inland continent. Voyagers could do a reasonably accurate job on the coastline, but early on, had to rely on Indians for news about what existed inland. Mapmakers back in Europe would then use Indian reports, or perhaps rumors and explorers' imaginations, to depict what existed inland. Sometimes they would come away with reasonable interpretations of what would later be observed, such as lakes or mountains. Other times, they would show the most fanciful of features. Many early maps depicted an inland sea, an extension of the Pacific Ocean, reaching all of the way from the west coast to the Carolinas. North America, at this point, was just a narrow strip of land. Of course, this not only turned out to be false, but there are no features even remotely resembling this. The imaginary sea may have come from a misinterpretation of barrier islands, explorers thinking the water between them and the coast was an arm of the Pacific.

It is always very difficult to write about map catalogues. Books can be readily described with words. Maps require images. We will mention a few items you will find in this catalogue, but issue the caveat that you need to either obtain a copy yourself, or go to Martayan Lan's website, to appreciate the wonderful, historic maps they have to offer.

Item 7 is a striking, early 17th century map of the Americas by Dutch mapmaker Jodocus Hondius. At this time, the Dutch were still actively involved in the exploration and settlement of North America (remember New Amsterdam?). Hondius presents a reasonably accurate image, though North America has been squashed, becoming much wider east to west then it proved to be. He also incorporates the early belief in a huge southern polar continent. It reaches all the way to the tip of South America, Hondius somehow ignoring what he learned from Drake's voyage around the Horn. However, Hondius, like other early mapmakers, had California right, showing it (including Baja) as a peninsula, rather than an island. It would not be separated from the mainland until later in that century. Priced at $8,500.