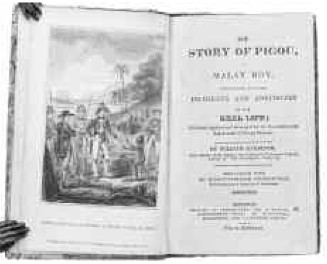 The not so real story of Pigou.


Item 84, published in 1826, is The Mission to Siam, and Hue, the capital of Cochin China, in the years 1821-2, by George Finlayson. Finlayson had accompanied the British mission to Siam (Thailand) and Cochin China (Vietnam). The mission was essentially a failure. Trade was difficult to establish because of internal conflicts within the two countries. However, Finlayson, naturalist and physician, kept a journal of the visit and what he observed, and left us one of the better pictures available of the area at this time. Unfortunately, Finlayson was debilitated by the journey, and did nor survive the trip home. It was left to Sir Thomas Raffles to edit and complete the work. €1,750 (US $2,236).

Item 95 is, The story of Pigou, a Malay boy, containing all the incidents and anecdotes of his real life... Despite the claim about "real life," the tale of Pigou in this children's book is a bit farfetched to believe. According to the story, Pigou was a small boy who hid in a Malay forest during an insurrection and massacre. He was found starving on a shore by a British sea captain, who rescued and took him to England as a cabin boy. On the trip, Pigou discovers the plotting of a mutiny and saves the crew from slaughter. He is rewarded in London by being placed in the care of a wealthy merchant. Pigou receives a proper British education, and grows up to be enormously wealthy and virtuous. The story is too good to be true, so I will label this one fiction. Written by William Gardiner, the book was published in 1822. €695 (US $888).

Item 162 describes, in Dutch, the beginning of an interminably long war. The Aceh War between the Dutch and Muslim Sultinate of Aceh in Indonesia dragged on from 1873-1904. Aceh had a history of independence, and was not willing to submit to Dutch colonial control. It took 31 years and hundreds of thousands of casualties before the Dutch were finally able to put down the uprising. Even that did not stop occasional resistance in the years ahead. After the Second World War, which saw Indonesia occupied by Japan, the Dutch were unable to regain control. Aceh became part of the new nation of Indonesia, but a guerilla movement sought independence for decades, finally agreeing to a peace in 2005. The peace came about after the devastating Tsunami of 2004, centered close to Aceh, which killed tens of thousands of its residents and left even more homeless. Item 162, about the earlier conflict, is De oorlog tusschen Nederland en Atchin, by George Kepper, published in 1874. €625 (US $798).