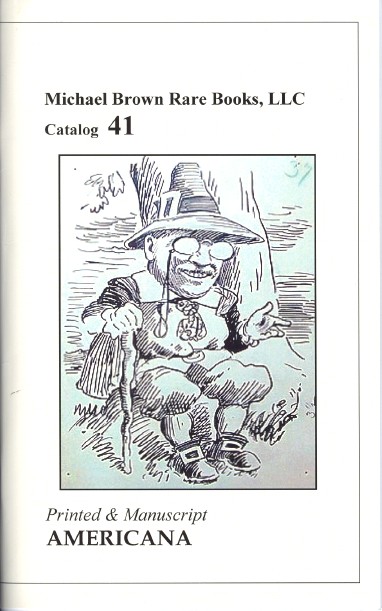 Recently issued was catalogue 41 of Printed and Manuscript Americana from Michael Brown Rare Books. This is a collection of just over 200 rare and unusual works in the Americana field, mostly from the 18th and 19th century, but with a few items extending outside of those borders. They cover just about everything that arises, from revolution to war, expansion, religion, slavery, politics, arts, trade, law, Indians, women's rights, and plain everyday life when everyday life was a constant battle to get by. This catalogue will be of interest to anyone who collects Americana, or any of these many fields in relation to the people of America. A lot of territory is covered. Undoubtedly, you will find something that fits with your own interests. Here are a few samples.

This is a report of one of the most momentous events in American history, though it probably didn't seem that way at the time. From May 16-18 of 1860, the still relatively new Republican Party met for its convention in Chicago. Eleven names were placed in nomination for president, including 1856 nominee John Fremont, New York Senator and future Secretary of State William Seward, Ohio Senator and future Supreme Count Chief Justice Salmon Chase, and Massachusetts abolitionist Senator Charles Sumner. Seward was the heavy favorite, and led after the first ballot, but was regarded by some as too radical and possibly alienating of moderates. As a result, by the third ballot, the votes had swung to hometown favorite Abraham Lincoln. As they say, the rest is history. Item 123 is Press & Tribune Documents for 1860. No. 3. Proceeding of the National Republican Convention, Held at Chicago, May 16th, 17th & 18th, 1860. This is a contemporary report from a Chicago newspaper covering the proceedings, speeches and balloting at this convention, which would determine the future course of American history. Priced at $2,500.

Joseph Rodes Buchanan was a pioneer in the paranormal sciences (or "sciences") of the 19th century. He established two new fields in parapsychology: "psychometry" and "sarcognomy." The former still has its share of followers, although the latter seems less influential. Psychometry has to do with the influence of others or events on the brain through some sort of energy bursts; sarcognomy the interaction between soul and body. Buchanan felt that a trained psychometer could diagnose any patient's disease by simple contact with him. A sarcognomist could heal those diseases. Unfortunately, a century and a half later, there is still a shortage of psychometers and sarcognomists, so we still get sick and die. Another example of the weaknesses in our educational system. Too many MDs, not enough sarcognomists. Buchanan's pioneering work, published in 1842, just as he graduated from the University of Louisville's medical department, is Sketches of Buchanan's Discoveries in Neurology. Item 133. $450.