New Arrivals at Between The Covers Rare Books 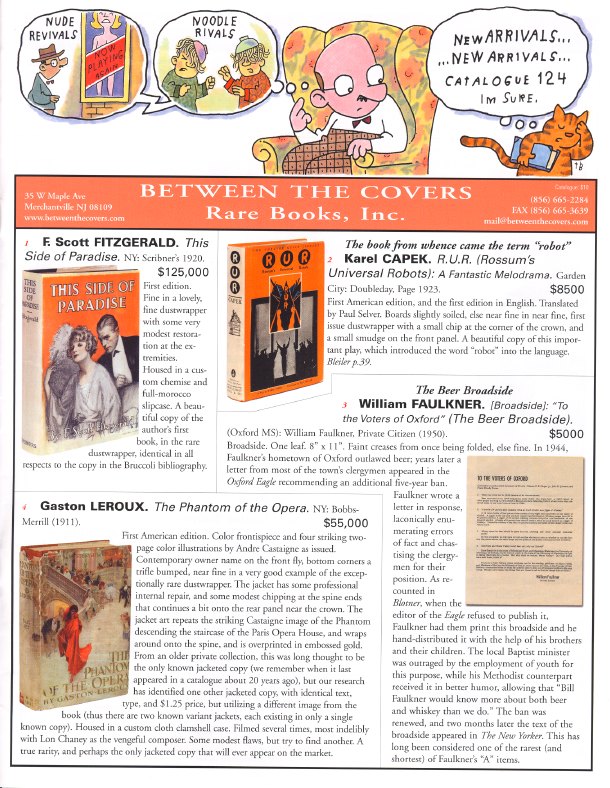 New Arrivals at Between The Covers.

The latest collection of New Arrivals from Between The Covers Rare Books has just arrived. As always, it is an entertaining collection of serious, odd, and amusing books and ephemera. The largest group is modern first editions, but there are sections on westerns, children's books, mysteries, and science fiction. Of course, modern firsts can cover any topic, so be prepared to find just about anything. As always, Between The Covers has provided illustrations of everything that is offered, making their catalogues among the most helpful offered. Here are samples of what they have recently acquired.

Item 3 is an unusual, but highly desirable William Faulkner piece. It is probably his shortest. Known simply as the "Beer Broadside," but headed To The Voters of Oxford, it is the famed author's attempt to have his hometown's prohibition of beer overturned. Beer had been prohibited in Oxford, Mississippi, in 1944. In 1950, a vote was held to extend the ban. The clergy supported an extension, as did the local newspaper. When Faulkner was unable to get the newspaper to publish his rebuttal to the clergy's arguments, he printed up this broadside and had family members hand it out. Faulkner counters the claim that beer was voted out in 1944 because of its "obnoxiousness," stating instead that at the time, beer drinkers, or those who didn't object to others drinking it, were off at war defending those who preferred staying at home. As for the argument that money spent on beer would be better spent on food, clothing, and other essentials, Faulkner says that by this logic, Oxford would have to close "the florists, the picture shows, the radio shops and the pleasure car dealers." Faulkner's logic was impeccable, but the voters ignored him and kept the ban in place. Priced at $5,000.

Knute Rockne was a writer? Apparently. The famed Notre Dame football coach released a book in 1925 called The Four Winners. It is described as a romance in which the football team captain must succeed on the field to win some young lady's heart. I have no way of knowing whether this is a piece of great literature, or of something else, but I do note that Rockne's reputation rests on his role as a great football coach, period. Item 61. $700.

Now here is a novel by a man known as a great writer, but not a great writer of novels. The author is John Philip Sousa, and he is one of America's most noted musical composers, famous for his marches. His novels are less well known. Item 107 is The Fifth String, written and inscribed by Sousa in 1902. $500.

Would you like to run your own gas station? This is a lost art. Gas today is sold at convenience stores. However, in 1934, gas was pumped at real garages, by real people who washed your windshield and checked your oil. Here is a helpful guide from P.A. Reynolds: Garage Organisation and Management. This book was published in London, but you probably knew that since "organisation" is spelled with an "s" rather than a "z." Item 11. $350.