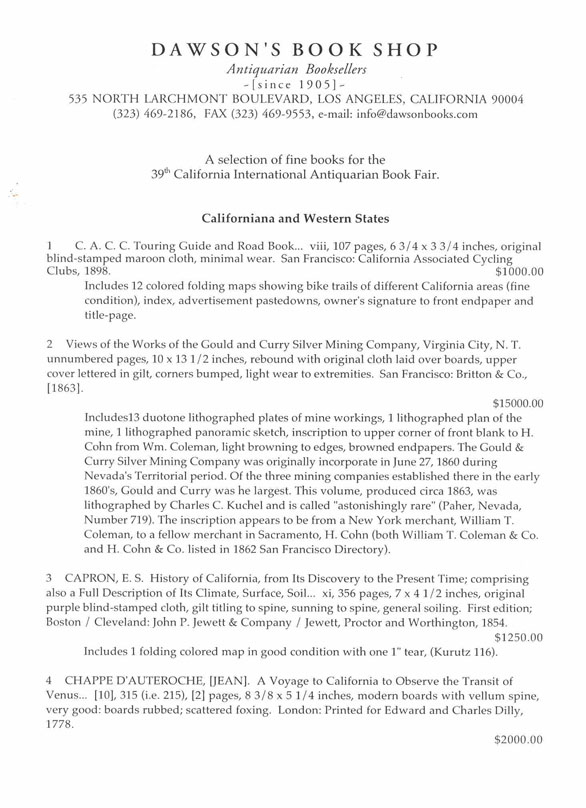 A selection from Dawson's Book Shop.

Dawson's Book Shop of Los Angeles put together a catalogue in conjunction with the recent California Antiquarian Book Fair. Dawson's is one of America's oldest bookshops, in business now for over a century. They have expanded to include a photographic gallery focused on California and the Southwest within the shop. Still, books remain at the heart of Dawson's, and as always, you can expect to find many significant and collectible works on their shelves. Here are a few from their antiquarian book fair catalogue.

Jan Struys was a determined traveler, though it does not sound like these were exactly pleasure cruises. Struys undertook three major voyages from his home in the Netherlands between the years 1647 and 1673. The first took him as far east as Japan, the second brought him around the Mediterranean countries, while the third took him to Arabia, Persia, and Russia. Offered is the first English edition, from 1683, of this book, originally published in Dutch in 1676: The Perillous and most Unhappy Voyages of John Struys, Through Italy, Greece, Lifeland, Moscovia, Tartary, Media, Persia, East-India, Japan, and other Places in Europe, Africa and Asia...together with an account of the authors many dangers by shipwreck, robbery, slavery, hunger, torture, and the like... Struys adventures included the horrors of being sold into slavery and subject to great suffering, but he also presents a travelogue of what he saw, including a climb up Mount Ararat where he was given a fragment of Noah's Arc. Some have felt Struys' accounts are a bit fanciful at times, but he nevertheless provides a look at many faraway lands from a time when western contact was very limited. Priced at $4,000.

Sir George Simpson was an officer of the Hudson's Bay Company, and like Struys, an inveterate traveler. His position brought him on many trips through the North American west and north (his cousin was arctic explorer Thomas Simpson). However, his book concerns a round the world trip he took in 1841-42. The most notable part of the journey was a trek across Siberia from west to east, but the first part of the journey brought him across Canada and then down the Pacific coast and over to Hawaii. Much of the book describes California in the pre-Gold Rush days. The book, published in 1847, is titled Narrative of a Journey Round the World, During the Years 1841 and 1842. Each of the two volumes in this set bears the bookplate and signature of Theodore Hoover, President Herbert Hoover's brother. $600.

Dawson offers a copy of the 1898 C.A.C.C. Touring Guide and Road Book. C.A.C.C. -- let's see, that would be California Automobile Club... No, wait. 1898? There couldn't have been a California Automobile Club touring guide in 1898. No, this is a guide for the California Associated Cycling Clubs. These clubs provided tour guides and races for the most popular form of personal horseless transportation available before 1900. This guide includes twelve maps of bike trails in the state. $1,000.