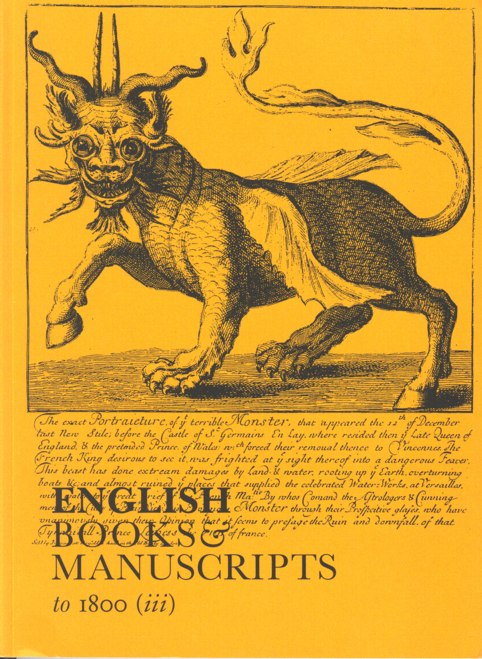 Bernard J. Shapero Rare Books has recently published a catalogue of English Books & Manuscripts to 1800. This is a collection varied by topic though consistent by printing location. Those with a focus on English history, from the days when the letter "f" was used for "s," and "y' was often used where we now employ an "i," will enjoy this collection. Some material nonetheless pertains to other lands, and we have even managed to ferret out a few pieces of Americana for those whose focus is on the other side of the pond. Still, this is primarily a very English assortment, and a most fascinating one at that. Here are a few samples.

One "Humphrey Clinker" (pseudonym) provided a guide to protecting oneself from Scotch "rogues," petty criminals of their day. The book is The hidden mystery of the Scots rogues newly brought to light: being a complete discovery of their intrigues all over the nation; with cunning trick they practice to deceive the unwary: with a plain and easy method to avoid or catch them. The circa 1790 book's stated purpose is to reveal the intrigues of these people who go about the country "stealing, cheating, drinking, quarreling, fighting, swearing, extortioning, slandering, and railing against such as will not give them what they ask." They certainly sound like a most unpleasant lot. Item 20. Priced at £700 (British pounds, or approximately $1,287 US dollars).

It seems that even British soldiers were given to bad behavior on occasion too. The case of the Island of Minorca...includes a plea from the natives of this Mediterranean island to the British to control the activities of their troops. The plea notes, "the continual thefts, robberies, rapes and the murders they committed have struck such a pannick among the peasants..." Evidently military discipline was a little short in those days. Item 66, circa 1717. £1,600 (US $2,942).

Here is my favorite title: Holl ddyledswydd dyn a osodwyd ar lawr...Welsh is certainly an interesting language. This is a translation of Richard Allestree's "The whole duty of man." Item 1, published in 1718. £400 (US $735).

Privateers were used by the European powers to do their dirty work on the high seas. Privateers were, in effect, licensed pirates, permitted and encouraged to commit piracy on the ships of a rival land in return for a payment to the state. The rest of the loot went to the privateers, which is why they signed on in the first place. Item 80 is An ordinance and declaration of the Lords and Commons...authorising any of his Majesties good and loyall subjects...to furnish with all manner of warlike provision, and send to sea what ships...they shall thinke fit, to ...seize upon by sea or land, going to assist rebels in Ireland. This is an open invitation to anyone to engage in piracy against any ships assisting rebels in Ireland. The privateers were authorized to seize all goods, money munitions, and anything else they could find, including the ships themselves, and after paying 10% to the crown, were free to keep the remainder for themselves. Item 80, dated October 21, 1642. £950 (US $1,748).