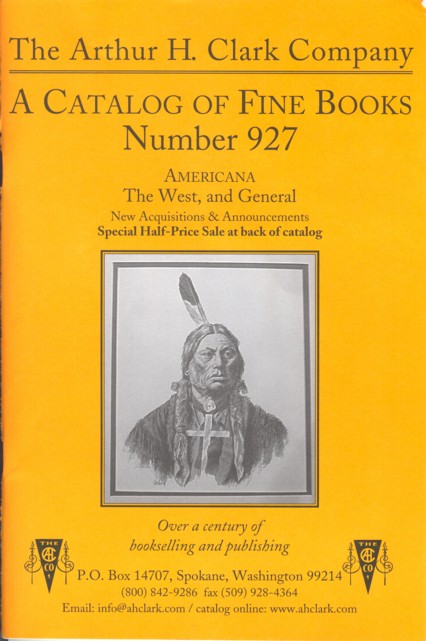 We just received the latest catalogue from The Arthur H. Clark Company. This is number 927 for this century-old bookseller from Spokane, Washington. Clark specializes in Americana, the west in particular, and is well-known and respected for publishing as well as selling books. This month they offer one new title, On The Way To Somewhere Else. This book is filled with accounts from lesser-known European travelers of the 19th century into the West, particularly the Mormon settlements. Unlike most Americans who took a very negative view of the Mormons, Europeans were more open-minded when encountering their customs. Speaking of their most controversial custom, an Italian Count records Prophet and future Church President John Taylor saying in 1853 "we don't think polygamy can last for long." Others who give their accounts include an outraged Catholic priest, a German prince, a liberated Frenchwoman and a French convert. This intriguing book is now available for $39.50.

There is also a selection of half-priced books in this collection, so this could be an excellent time for bargain hunters to get acquainted with Clark's catalogues. Here are a few of the books offered for sale within its pages.

Jedediah Smith was a pioneer among mountain men. He was a trapper and explorer who traveled to more places than any of the other mountain men of the era, the 1820s. He was the first American to enter California from the east, somehow crossing the Mojave Desert and living to tell of it. He was also the first to cross the barren Great Basin of Nevada and Utah, still some of the most uninhabited territory of the lower 48. Yet another first was his trip up through central California and Oregon. Smith would survive a mauling by a bear, several Indian attacks which cost the lives of many companions, hunger and thirst, and all the deprivations of his chosen lifestyle. His luck ran out in 1831, when, at the age of just 32, he was killed by Comanches. His body was never found. Item 108 is Jedediah Smith: Trader and Trail Breaker, a 1936 biography of this trailblazer by Maurice Sullivan. $150.

Here is another story about travels into the wilderness: Travels and Adventures in Canada and Indian Territories, between the years 1760 and 1776. Author Alexander Henry was a trader in Canada, who was granted exclusive trading rights on Lake Superior in 1765. He lived with the Indians and participated in numerous ventures, one of which evolved into the legendary Northwest Company. Unlike Smith, Henry managed to avoid the extreme risks, and went on to live a long and prosperous life, and also unlike Smith, got to complete the story of his adventures. Item 136, published in 1809. $1,250.

Captain James H. Simpson carved out a route from Utah to California in 1859 fairly close to one that Smith had first pioneered. Rather than following the Humboldt River, it worked its way down from Salt Lake City through central Nevada, cutting around 250 miles off the trip. Those looking for off-the-main-road adventures in Utah can still follow the old Pony Express Trail, pass Simpson Springs Station in the Simpson Mountains, and see fairly empty territory that doesn't look that different from when Simpson traversed it. His report, published by the Government Printing Office in Washington, is Report on Explorations across the Great Basin of the Territory of Utah for a direct wagon-route from Camp Floyd to Genoa, in Carson Valley, in 1859. Oddly, the book wasn't printed until 1876, the Civil War intervening before it could be published. Item 261. $850.

Item 288 is the story of Buffalo Jones, by his friend and admirer, legendary western writer Zane Grey. Jones made his name hunting buffalo to feed railroad workers and others, but once realizing the herds were fast disappearing, would be a leader in attempts to preserve the species. He would reintroduce several herds, and even tried to breed a cross with cattle, which he called "cattalo," but they were unable to reproduce. Grey's book about Jones is called The Last of the Plainsmen. Item 288 is a copy of this 1908 book, and one that comes with an inscription from "Buffalo Jones," the "Last of the Plainsmen." $940.

Here is a detailed source for presidential papers from the first century of United States history. It is A Compilation of the Messages and Papers of the Presidents...published in 1897. It is filled with official messages, proclamations, and addresses of presidents from Washington to Cleveland. Containing 20 volumes, this set is great for historical research or looking erudite and impressive on your shelves. Item 20, compiled by James D. Richardson. $195.