Canadiana and Other Curious Things from David Ewens 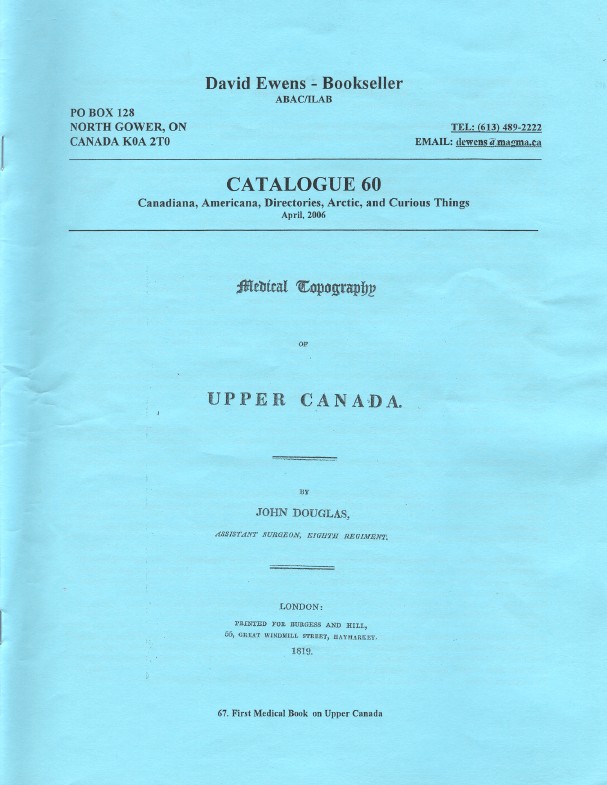 We have received our first catalogue from Canadian Bookseller David Ewens. His Catalogue 60 is headed Canadiana, Americana, Directories, Arctic, and Curious Things. That is exactly what is found in this catalogue. Most items have a Canadian connection, but not all. Not surprisingly, where there is Canadiana there is Americana. There is, naturally, a substantial amount of arctic material in a Canadian catalogue, since much of Canada is either in the arctic, or a lot closer to it than I would care to be. Ewens has a surprisingly large collection of old Canadian city directories. Finally, material that doesn't fit those categories includes some truly curious things. Here is a look inside the covers.

We cannot help but start with the curiouser of the curious. Ewens offers seven items related to Richard Brothers, and as an aside, Brothers was too daffy to be a sensible Canadian. So, as a young man, he moved from his birthplace in Placentia, Newfoundland, to Britain. Richard Brothers was a 30-something former sailor with the British Royal Navy when he began to receive revelations. He began as a healer in 1792, and his fame quickly spread. Over the next three years, he would reveal many things to the public, at least one of which was dead on (the killing of the King of France). Among other revelations were that many Englishmen were really descendants of the Hebrews, that he was Prince of the Hebrews, that he was a direct descendant of King David and of Jesus' brother James, which, he pointed out, made him God's nephew. However, when he started predicting the death of the English King, and that he was the rightful King of England, the authorities arrested him for treason. Rather than convicting him of this charge, the authorities found Brothers insane and locked him up.

Still, this did not stop Brothers from writing books and pamphlets, and he garnered a surprisingly large following for someone with such odd views. Among his followers was Nathaniel Halhed, a respected Orientalist and Member of Parliament, who spoke up in his defense. Brothers apparently even influenced some New England cults as his books were published in America. He went on to predict that late in 1795, he would be revealed as ruler of the world. As we now know from hindsight, this did not come to pass. Many of his embarrassed followers began to drift away, Halhed resigned from Parliament, and Brothers' day had passed. The last of his works was published in 1797, but his following disappeared. He was released from the asylum in 1806, and spent the rest of his life preparing for his move to the New Jerusalem, but he was by then a lonely, forgotten figure. He died still in London in 1824.

Item 36 is Brothers' A Revealed Knowledge of the Prophecies & Times. Book the First. Wrote Under the Direction of the Lord God...Containing, with Other Great and Remarkable Things, Not Revealed to any Other Person on Earth, the Restoration of the Hebrews to Jerusalem, by the Year 1798: Under their Revealed Prince and Prophet. Brothers was exactly one and one-half centuries early on his prediction of the restoration of the Hebrews to Jerusalem, and wrong about who would lead them. This was his first work, published in 1794. Priced at $850 Canadian (approximately US $739). Other Brothers related material offered include some of the "Prophet's" other works, as well as those of both his supporters and detractors. It is an interesting look at a late 18th century charismatic religious movement that suddenly burned brightly, and just as quickly, faded away.