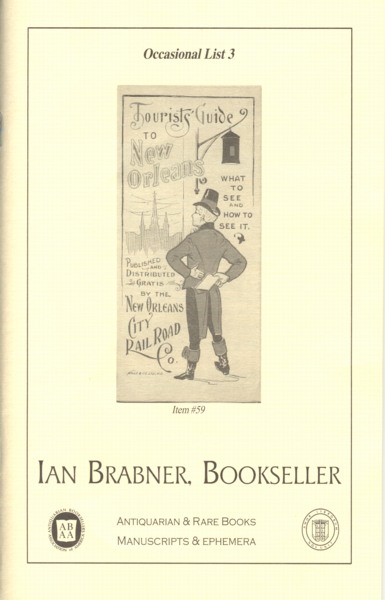 This is our first catalogue review for Ian Brabner, Bookseller. Brabner is an ABAA-ILAB bookseller from Wilmington, Delaware, who has been selling books since 1995. His specialty is antiquarian and rare books, manuscripts, and ephemera. In other words, just about anything in the field of collectible books and related material can show up in an Ian Brabner catalogue. Here are a few of the items we found in his Occasional List 3, but we caution that it is hard to categorize Brabner's offerings from a few samples as the material he sells covers a very wide spectrum.

Item 55 is Evan Allen Bartlett's story of a not very nice man, Love Murders of Harry F. Powers. Beware Such Bluebeards. Actually, there wasn't much love displayed by Mr. Powers, except for money. "Bluebeard" is a term used for men who marry women for their money, and then dispose of them in the most unpleasant of ways. He attracted women by sending appeals to "lonely hearts club" publications, snaring lonely and trusting women into his web of false romance. Powers was no great catch. Time Magazine described him at the time as "small, pudgy, pig-eyed Harry F. Powers." I will admit that I don't always understand women, but that doesn't exactly sound like a spectacular catch to me. Nonetheless, he did entice at least two women into marrying him, and there was speculation that there could have been dozens more (unlikely). He was eventually convicted of killing Mrs. Dorothy Pressler Lemke, described by Time as a "matronly divorced nurse." Probably the key evidence which swayed the jury against Mr. Powers was the fact that Mrs. Lemke, along with another woman and her three children, were found buried next to his garage. Evidently Powers was not able to come up with a good enough explanation for that one. Supposedly, he enjoyed killing them. The jury convicted, and according to a contemporary newspaper, the "West Virginia Bluebeard's" life "snapped away" (he was hanged) on March 18, 1932. Bartlett's scarce account is priced at $250.

It's hard not to look at a Tourists' Guide to New Orleans a little differently than we would have, say, a year ago. This is a look at the city in 1902, complete with photographs, map and places to visit. See the photo on the front cover of this catalogue. So much has changed in the intervening century, especially the past year. Item 59. $85.

Item 24 is a colored lithograph of Congressman and Major General Nathaniel Prentiss Banks, circa 1861. Banks led a long and varied political career, interspersed with a very mediocre military career, which is memorialized in this picture of Banks, hand on his sword. He was first elected to the Massachusetts legislature in 1849 on his eighth try. He was elected to the U.S. House of Representatives as a Democrat and Free Soiler in 1852, a Know Nothing in 1854, and a Republican in 1856. In 1856, after a long battle, he was elected Speaker of the House, the first Republican to achieve a national office. In that role, he supported anti-slavery positions. In 1858, he was elected Governor of Massachusetts, and it was his ability to raise volunteers and financial support for the Civil War in that state that led President Lincoln to appoint this nonmilitary man Major General. This part of his career was not marked by success.