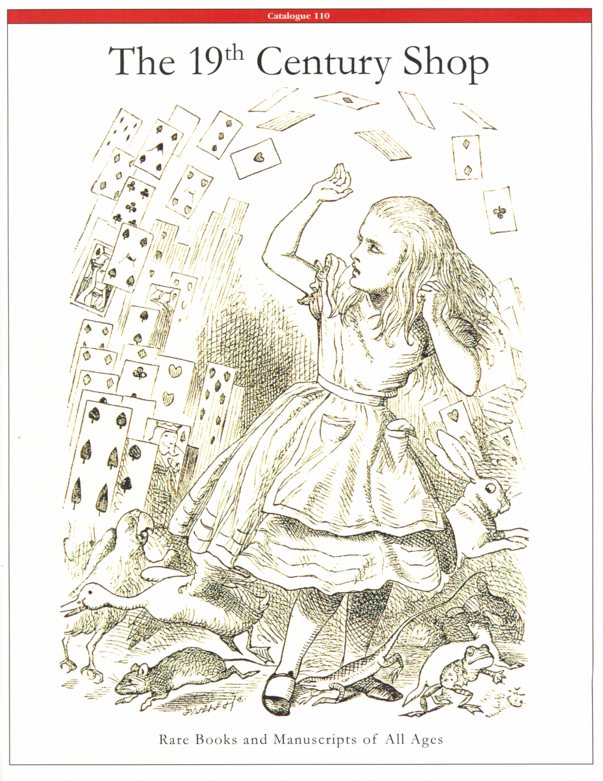 The latest from 19th Century, with a Tenniel drawing of Alice on the cover.

The 19th Century Shop has issued a new catalogue of Rare Books and Manuscripts of All Ages, Catalogue 110. The material they offer is the very top of the line, from manuscripts that are, naturally, unique, and also of historical importance, to some of the rarest and more desirable of books. This is not a catalogue for the amateur, but for the highest level of collectors, it is a must. We will mention a few of the items within its pages, which will certainly illustrate the type of material they are offering for sale.

Translations of the Laws, Orders, and Contracts, on Colonization, from January, 1821, up to this time, in virtue of which Col. Stephen F. Austin, has introduced and settled foreign emigrants to Texas...may not sound like an exciting title, but it was the first book published in what is this most collectible of states. Only 300 copies were printed, and even by 1836 it was rare and sought after. Today, it is extremely rare. Stephen F. Austin is known by the label Sam Houston gave him at his funeral: the "Father of Texas." Austin would have been surprised that this was in store when he first crossed the Sabine River in 1821. His father, Moses Austin, had obtained a Texas land grant from the Spanish authority, and Stephen went to Texas to set up a colony on the land after learning of his father's death. He would spend the next decade building a colony and dealing with the authorities, first Spanish, then Mexican after the revolution. At times they encouraged development, at others held back. They obviously bounced back and forth between their desire to develop the land, and obtain revenues from it, and their fear of the growing Anglo presence within their borders. By the early 1830s, settler dissatisfaction was growing, as were suspicions of their intentions by Mexican authorities. Austin was a moderate, advocating conciliation with the Mexican government, not revolution. Nevertheless, Austin was arrested for insurrection in 1834 and spent over a year in a Mexican jail. Shortly thereafter, the Texas revolution would begin, with Austin now a supporter. Austin ran for president of the new Texas Republic in 1836, lost to Sam Houston, but was appointed Secretary of State. However, he died that same year, leading to Houston's funeral oratory. The book being offered, a Texas first, was published in 1829, and it spelled out the laws for Austin's colony, as few of his settlers knew the local laws since they could not understand Spanish. Priced at $235,000.

The Book of Mormon is another American first, in this case the first edition of the book that launched America's largest home-grown faith, now followed by over 11 million people worldwide. It was published in 1830 in the small upstate New York town of Palmyra, near where founder Joseph Smith said he discovered the plates which revealed this book. This first edition is the only one that described Smith as its author, later ones labeling him the translator. The 19th Century Shop reports that the first is also unique in that it was the only edition to forbid polygamy. This copy is complete, including the page of witnesses' testimony. $100,000.