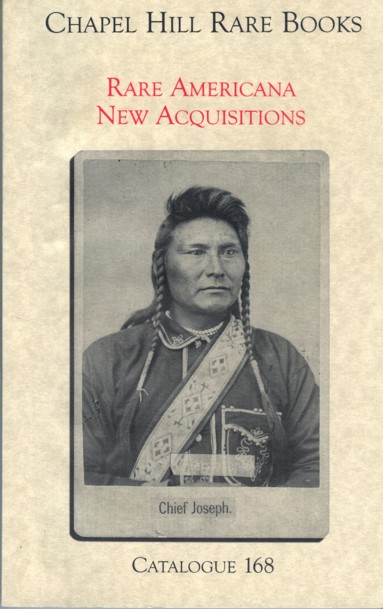 Chapel Hill Rare Books has published a new collection of Rare Americana -- New Acquisitions. This one is an inch thick and filled with fully described rarities, 346 in all. While Chapel Hill catalogues are an outstanding source for material about the Old South and Confederacy, there is much more here, including the American North, West, Revolutionary War and Colonial times. Here are some samples of the type of material that is available in this most fascinating new catalogue.

The Civil War did not begin in 1832, but it might well have. Just as they would almost three decades later, South Carolina raised the banner of secession in 1832, although not quite as bluntly. Rather, the state asserted it had the right to ignore, or nullify any federal laws it did not like. At the time, South Carolina opposed federal tariffs it felt aided the North at the South's expense. The state passed its Ordinance of Nullification, which brought a swift and powerful rebuke from President Andrew Jackson. That response is printed in a broadside, The PROCLAMATION of Andrew Jackson, President... In it, Jackson labels Nullification an act of treason and pledges to enforce the laws of the United States with military force if necessary. Congress passed the Force Act in 1833 to assure he had the power. Meanwhile, it also offered South Carolina some compromises on the tariffs, and with that, the state, unable to get support from any other southern state, backed down from the brink. Item 252 is a copy of this broadside printed on silk. Priced at $4,750.

There would be no backing down twenty-eight years later when South Carolina responded to the election of Lincoln by seceding from the Union. This time, the rest of the southern states joined her. Item 119 is a copy of An Ordinance to Dissolve the Union Between the State of South Carolina and Other States United with her under the Compact Entitled "The Constitution of the United States of America." This is one of the official printings of this proclamation given to members of the Secession Convention, and it reproduces the original manuscript document, including the legislators' signatures. The ordinance was passed on December 20, 1860, and a few months later, the country would be engulfed in war. Item 119. $35,000.

U.S. vice presidents usually don't get much recognition from history. The same can be said about Confederate vice-presidents, though there was only one. His name was Alexander Stephens, and oddly, he was an opponent of secession. He had supported the compromise measures of the 1850s and supported northern Democrat Stephen Douglas in the 1860 election. Even after Lincoln's election, he continued his opposition, only supporting secession after his home state legislators voted for it. Nevertheless, he was elected Vice-President of the Confederacy. Stephens is best known for his "Cornerstone Speech," in which he frankly admitted that slavery "was the immediate cause of the late rupture and present revolution." He noted that Jefferson and the other founders looked on slavery as "an evil they knew not well how to deal with," but one that "somehow or other" would pass away.