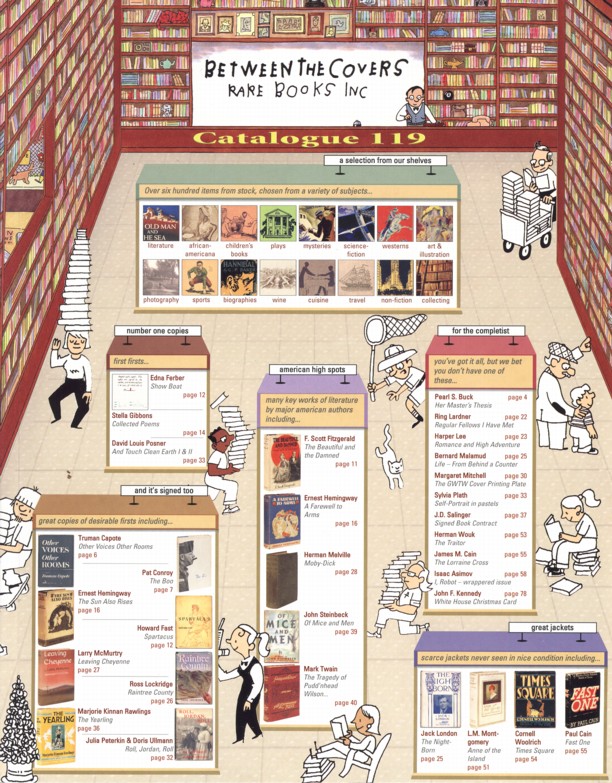 Comic art is a feature of Between The Covers catalogues.

New from Between The Covers Rare Books is an extensive collection of material crossing over many fields. To name a few, you will find literature, African-American history, children's books, drama, mystery, science fiction, westerns, art, photography, sports biography, wine, cuisine, travel, and more. Between The Covers catalogues are an absolute delight. Along with the original cartoon art (see the picture of the cover), every description comes with a color image of the book. Considering there are over 600 of them listed, that is a whole lot of photography. This was no easy catalogue to put together, but the results are spectacular. But, enough about the catalogue's physical appearance. Let's take a look inside.

Jorge Luis Borges was an Argentine writer many believe most responsible for bringing Latin American literature to the world's attention. Borges was noted for his short stories, the kind that require their readers to think. Evidently 1974's The Congress was one of Borges' personal favorites. Item 14 is a first edition signed by Borges, who by that time was blind. Priced at $1,750.

Item 126 is a signed later edition of Hemingway's For Whom the Bell Tolls. This one was inscribed by the author in 1941 from Havana to Tubby Marvin, "with much affection from his friend Ernest Hemingway." As to who Tubby Marvin was, I do not know. Not even Google seems to know this one. The catalogue writer for Between the Covers notes, "This inscription, unlike many Hemingway inscriptions we've seen of late, has the advantage of being written by the Ernest Hemingway who actually wrote the book." You will pay a bit more for signatures from that Ernest Hemingway, but we think it is worth the extra charge. $8,500. Incidentally, this is just one of 18 Hemingway items found in the catalogue.

Item 41 brings us back to the Second World War, a time when Japan was not on most Americans' list of favorite nations. Whitman Chambers book Invasion was published in 1943, when Pearl Harbor and its aftermath were deeply imbedded in the American psyche. This one must have raised the paranoia level a few notches. It is an imaginary account of a Japanese invasion and takeover of California following a landing near Los Angeles. The cataloguer notes, "The dustwrapper belongs in the jacket art Hall of Fame, with leering Japanese soldiers capturing besuited business men and brassiere-clad blonde starlets at the Los Angeles City limits." $600.

Item 22 is a first edition of Richard Brautigan's Trout Fishing in America. This is one of those '60s counterculture classics that lives on, even if not quite as relevant as it once was. Sort of like the Rolling Stones. $1,750. For a review of Brautigan's daughter's book looking back at her famous father and their dysfunctional family, from an earlier edition of AE Monthly, go to http://www.americanaexchange.com/NewAE/aemonthly/article_1.asp?id=288&q=brautigan&page=1.