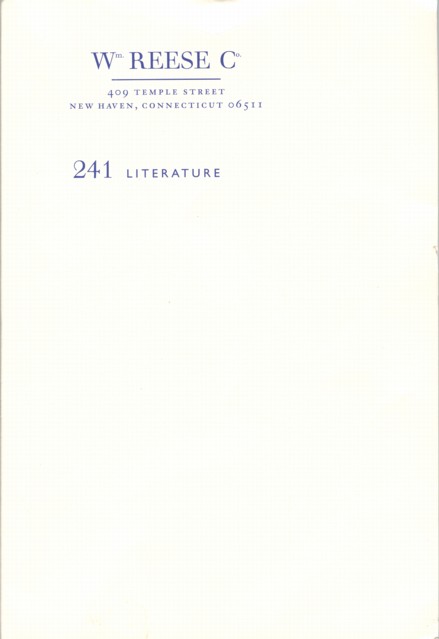 The William Reese Company has issued a catalogue of Literature. Included under that heading are poetry and prose, manuscripts, fine printing, filmscripts, and bibliography. This is not the typical Reese catalogue of high end historical Americana. Nor are the items quite as old as those found in most Reese catalogues, the concentration here being on 20th century works. One more difference - those who may find typical Reese material a bit high for their budgets will discover most of the works within this catalogue to be readily affordable by those of more modest means. There is an inscribed F. Scott Fitzgerald work in here for $35,000, but then again, there are items for $24. The number of collectors who do not purchase items somewhere within this price range must be small indeed. Here are a few samples.

From the upper end, item 249 is an inscribed copy of Ernest Hemingway's 1927 collection of short stories, Men Without Women. It says, "To my friend & compatriot Archibald MacLeish a true man without women this book is dedicated - 'Life is real, Life is Ernest' - Hemingway." A second inscription, to Mrs. MacLeish, states, "Dedication to Ada later - Papa." Of course one must wonder how Mrs. MacLeish felt about Hemingway describing her husband as a "true man without women." What was she; chopped liver? Anyway, while not regarded on a level with Hemingway, MacLeish was himself an important writer of the 20th century, writing primarily poetry, along with plays and essays. During Franklin Roosevelt's administration, he took time off to fill several government posts, including head of the Library of Congress, a speechwriter, propagandist, and Assistant Secretary of State for Cultural and Public Affairs. He spent most of his post-Roosevelt years again writing and serving in academia. He was also a great personal friend of Hemingway, whom he met in Paris in 1924. Priced at $20,000.

As we said, most items herein are not so pricey. Item 250 is another Hemingway piece, a Souvenir Book for For Whom The Bell Tolls. This is a 1943 booklet produced for the release of the film version of this book, which starred Gary Cooper and Ingrid Bergman. There are photographs of the stars and articles by the director, along with comments by Cooper and Bergman and others involved with the production. Item 250. $100.

Here are a few more items for those who like movies. There is an early working draft for the 1943 film Tarzan Triumphs. This was one of the films starring Johnny Weissmuller in the title role, and as one might expect considering the date of this film, the British born King of the Apes was fighting Nazi invaders at the time. This copy is signed by Lester Koenig, who helped adapt the printed Ape-man to the screen. Item 95. $450. Item 101 is a mimeographed "Final Draft" (with enough revisions to indicate it was not so final) for the more critically acclaimed film Breakfast at Tiffany's. Everyone knows this Audrey Hepburn classic, adapted from a novella by Truman Capote. It won two Academy Awards, though both of those were for its music (notably, "Moon River"). Hepburn did receive a best actress nomination. Item 101. $3,250.