A Variety from Rulon-Miller Books 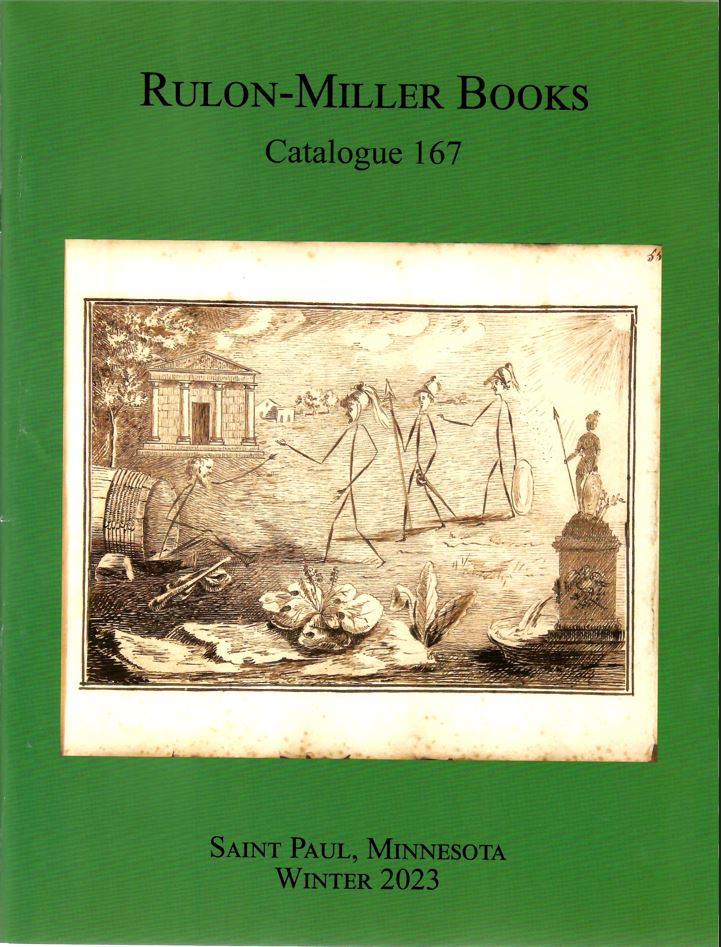 The latest from Rulon-Miller Books.

Rulon-Miller Books has issued their Catalogue 167. This is one that falls into the category of a variety or miscellany. There is too wide a variety of material to describe specifically. There's a good reason the only title is its catalogue number. What that does mean is there is something for everybody in this collection, lots of interesting and very desirable material. These are a few selections.

The phonograph may seem ordinary and outdated technology today, but at the time it was invented it was absolutely amazing. Voices could be captured and preserved. People's last words of wisdom in their own voice could be saved for posterity and passed down through generations of descendants. So observed Frederick Garbit, M.D., in this pamphlet, prepared for an exhibition in Boston in 1878. It is a tribute to the invention and inventor, The Phonograph and its Inventor, Thomas Alvah Edison. Garbit misspelled Edison's middle name of Alva. Edison had just invented his talking machine the previous year so the technology was new and amazing at the time. This and a few other pamphlets introduced the “tenth wonder of the world” to the public. Item 52. Priced at $2,500.

Those who were around in the 1960s will remember that one of the greatest symbols of the culture wars of that time was long hair on men. There were all sorts of insults and attacks on the manhood of men who had long hair, and as today's fashions attest, long hair won that debate. However, this was not new, as this book published 300 years earlier makes clear. The title is Comarum akosmia the loathsomnesse of long haire, or, a treatise wherein you have the question stated, many arguments against it produc'd, and the most materiall arguments for it refell'd and answer'd: with the concurrent judgement of divines both old and new against it. With an appendix against painting, spots, naked breasts, &c. This happy title was published in 1654 and the writer was the Nonconformist minister Thomas Hall. Hall had much to say about long hair, none of it good, such as it is a breeding ground for vermin and that some men in Poland lost their eyes when their long hair was cut. He observed that modesty was the way in England before some men began following fashions from France and Spain, where, he gently observed, people are Papists and Idolators. After his lengthy diatribe on men's hair, he turns his attention to women whose wearing make-up is “the devil's work,” an attempt to induce lust in men. Make-up, he declares, is “the badge of the harlot.” Item 74. $4,000.

If you were wondering about that original though odd artwork on the cover, here is the explanation. It is a manuscript educational game from France, probably late 1700s, maybe early 1800s. The artist/creator is unknown and there is no sign it ever got beyond this one manuscript version. There are 58 pen and ink drawings including 55 of various historic scenes and sights, dating as far back as the Bible, classical times, and then European history. The most recent event comes from around 1760 though the paper indicates it could have been created somewhat later. There is nothing from the French Revolution, which would be surprising if created after that date. The object is to identify the event depicted. There is an eight page manuscript titled Explications des dessins-Enigmes (explanations of the drawings-riddles) for those unable to guess what they were. While the humans are in simple stick figures, the landscapes and structures are meticulously drawn, the artist making sure that the details of geography and architecture conform with reality. In a few cases, such as on the cover art, the stick figures even have human faces. Considering the artist's talent, it is unclear why he/she used stick figures for human bodies. As Rulon-Miller says, “In all, an enigmatic, slightly surreal album interesting for its style, artistic accuracy, and its pedagogical approach to history.” Item 128. $17,500.

Is there life on the moon? No. We all know that now, but during the 19th century, many believed there was, including some reputable scientists. Telescopes were not as powerful as they are today, and no one had been there to check it out. That made for a population susceptible to what its creator described, in his book, as The Moon Hoax; or, a Discovery that the Moon has a vast population of Human Beings... published in 1859. The author was Richard Adams Locke, a reporter for the New York Sun, who is otherwise an unknown and forgotten individual. This was his claim to fame. He published six articles based upon the claim that famed astronomer John Herschel had observed life on the moon through a telescope at the Cape of Good Hope. This information, he said, had been reported in the Edinburgh Journal of Science, which by the time of his article (August 1835) had already gone out of business. People were fooled. News from overseas took weeks if not months to get to America then (as in the Battle of New Orleans). As a result, Locke was able to carry on his hoax for a while. Herschel's father, William, also an astronomer, firmly believed there was life on the moon, and thought he could see their towns through his telescope, which made it all even more believable. Locke claimed that the younger Herschel had seen animals that looked like goats, bison, and unicorns. Even more dramatic, he claimed Herschel had seen some human-looking beings with bat wings who had built temples on the moon. Locke did achieve something good for his paper, just a year old at the time – he quintupled circulation. He later claimed it was all satire, not meant to be believed. Item 99. $500.

Next is Letters Exhibiting the Most Prominent Doctrines of the Church of Jesus Christ of Latter-day Saints in Reply to the Rev. William Crowell... a fourth edition published in 1852. The author was Orson Spencer, a former Baptist minister who converted to what is commonly known as the Mormon faith. Rev. Crowell was a fellow Baptist minister who did not convert. The book is a compilation of letters Spencer wrote his former colleague explaining the basic tenets of the religion. A fourth edition would not likely be particularly interesting were it not for the inscription. That inscription reads, “Mons. Jules Remy, presented by Governor Brigham Young, President of the Mormon Church. Great Salt Lake City, September 30th, 1855.” Jules Rémy was a French naturalist and traveler. Over the course of his life, he visited North and South America, Africa, and Asia. He spent several years in Hawaii and knew the King. In 1855, he and Julius Brenchley traveled to Salt Lake City where they spent a month before moving on to California. They were fascinated by the new religion and a few years later, after returning to France, they wrote a book about their journey to Salt Lake and in particular, about the Mormons and their faith. Item 118. $3,500.