Magnificent Books, Photographs and Manuscripts from the 19th Century Shop 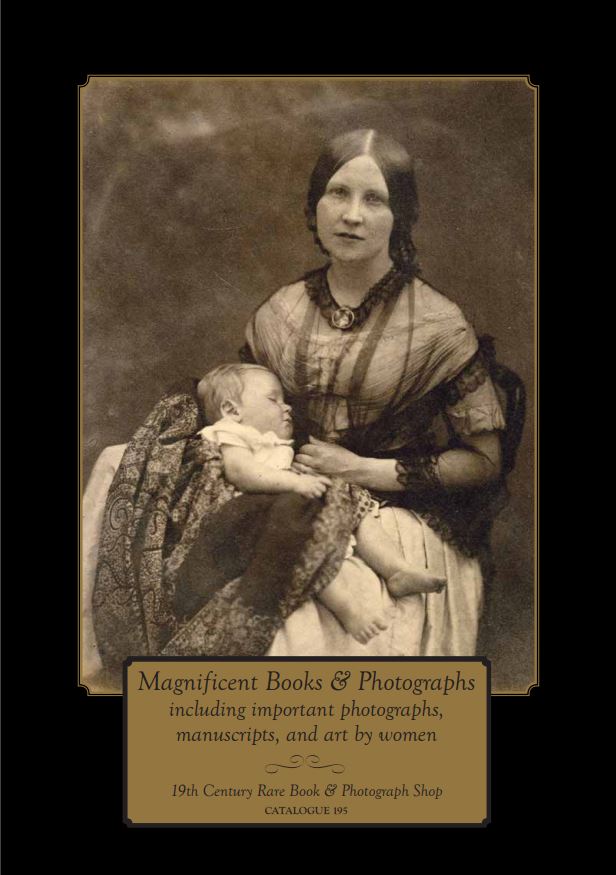 The 19th Century Rare Book and Photograph Shop has created a catalogue of the some of the most amazing and important works you are likely to find being offered to the public. The title is Magnificent Books & Photographs including important photographs, manuscripts, and art by women. Among the names represented by personal letters and documents or inscribed books are towering figures like Ben Franklin, Albert Einstein, Harriet Beecher Stowe, Mark Twain, Lincoln & Douglass (that's Frederick not Stephen A. with only one “s”), and all 12 of the men who have walked on the moon. Others represented by exceptional copies of their books include Shakespeare, Darwin, Madison, Spinoza and Fitzgerald. It's hard to believe some of these things are still available to collectors. These are a few selections from this magnificent catalogue.

She wrote dozens of books, both fiction and nonfiction, and lots of articles, and you know her name well, but you probably only know one book she wrote. That's what happens when its the biggest selling novel of its century and probably the most influential American novel ever written. That would be Uncle Tom's Cabin and the author Harriet Beecher Stowe. That book was published in 1852 and its depiction of slavery incensed both North and South, the North because it depicted the horrors of slavery and the South because it attacked their “peculiar institution.” However, she began writing much earlier. This is the earliest extant manuscript she wrote, circa 1825 when she was 14. It's a poem titled Description of the twelve Months of the Year. A New Year's Dream. In it, she descends into an unknown cavern, a gem of a place, where she meets the twelve daughters of the rolling year, one for each month. Sometime after her marriage to Calvin Stowe in 1836, she wrote in the margin “By Harriet Beecher, now Mrs. Stowe – written at the age of fourteen.” She finally did publish her poem, somewhat revised and with a slightly different title, in The Christmas Keepsake for 1849. Priced at $35,000.

This is a first edition and only known copy of a “landmark work of Copernicanism,” the first account of Copernican heliocentrism in a vernacular language. There are a handful of copies extant in Latin and one in English. This one is in German, the Practica of Achilles Gasser, published in Nuremberg in 1545. Gasser was a mentor of Rheticus, Copernicus' only student and assistant who was instrumental in having his controversial De Revolutionibus printed. This book introduced the now well-established claim that the Earth and planets revolve around the sun, rather than the sun and planets revolve around the Earth. It was controversial as it contravened the prevailing theological belief then that Earth was the center of the universe. It was the same belief that got Galileo arrested for defending almost a century later. Copernicus avoided such punishment by dying shortly before his book was published. Gasser's book provides an easily understood description and defense of heliocentrism. In a dedicatory letter found only in the German edition, Gasser points out that the movements of the stars and planets has been “incongruous and imperfect” based on astronomers' calculations, but that Copernicus has now explained it with “an utter and completely new foundation unheard of before...that the Sun is a light for all creation and stands unmoved in the midst of the whole universe.” While an introduction by the editor of Copernicus' book said that the theory was only to be used for mathematical calculations and does not mean the sun actually is at the center of the universe, Gasser pulls no punches in saying that this is actually the way it is the real world. He also notes the controversy it has caused by saying that while Copernicus' theory has solved the astronomical/mathematical problem, it “has also immediately been regarded as having perpetrated a heresy, and indeed – by many others incapable of understanding his matter – is already being condemned.” $95,000.

Next we have a touching father and son portrait taken on February 5, 1865, in Alexander Gardner's studio in Washington. The father was Washington's most notable resident at the time, Abraham Lincoln, the son his youngest of four, 11-year-old Thomas “Tad” Lincoln. Tad leans on a table, looking impish, which was appropriate, while the President is seated with a very pleased look on his face. Lincoln, who had already seen two of his sons die, was particularly devoted to young Tad. Tad was similarly devoted to his father. It was a very close bond. Lincoln doted on his son whose life was complicated by a speech impediment that made it hard for others to understand him. Tad had the run of the White House, a mischievous boy and practical joker who probably drove all of Lincoln's staff and officials nuts. His law partner noted that back in Illinois, there were times when, speaking of Lincoln's boys, he “wanted to wring their little necks,” while Lincoln was oblivious to the commotion. Sadly, the future for this pair was dark, the President being assassinated only a little over two months later while Tad died six years later at the age of 18. $65,000.

Now, here's the Douglass. Frederick Douglass wrote this letter on April 16, 1861, just three days after the fall of Fort Sumter, to his neighbor, friend, and abolitionist, Samuel Porter of Rochester, New York. Douglass saw the one bright spot in the coming conflagration. He writes, “ I am deeply exercised by what is going now in the country. Oh! that out of the present trouble and chaos might come the Slaves deliverance! The calamity of civil war can have no compensation short of this.” Douglass also fills his friend's request for a sample of the handwriting of John Brown with a few words cut from a letter from “my old and precious friend John Brown.” $295,000.

This is a letter from a man who might have been jealous and resentful of Charles Darwin. He wasn't. He was an admirer who constantly supported Darwin for the remainder of his life. Alfred Russel Wallace had spent years studying plant and animal life in the Malay Archipelago. It led him to a conclusion about the origin of the forms of life he saw – evolution. However, Wallace knew nothing of Darwin's similar conclusion as the latter had not published anything on the subject. They each came to the same conclusion separately and unaware of each other's work. Wallace wrote to Darwin about his theory at which point Darwin realized they had come to the same result. They agreed to publish the new theory in a joint paper in 1859. Darwin would go on to write On the Origin of Species and many other books on the subject while Wallace returned to his work. He never felt upset that Darwin was getting most of the credit for what they both discovered, rather, he supported Darwin and the books he later published. This is a letter Wallace wrote to an unnamed recipient in 1889, several years after Darwin died. It concerns Darwin's Voyage of the Beagle of 1839 from which he later concluded that the forms of life he saw in South America on that voyage were the products of evolution. Wallace writes that Darwin's book “is considered one of the best & most interesting books of the kind ever written, & I am sure you will not regret purchasing it.” $12,500.