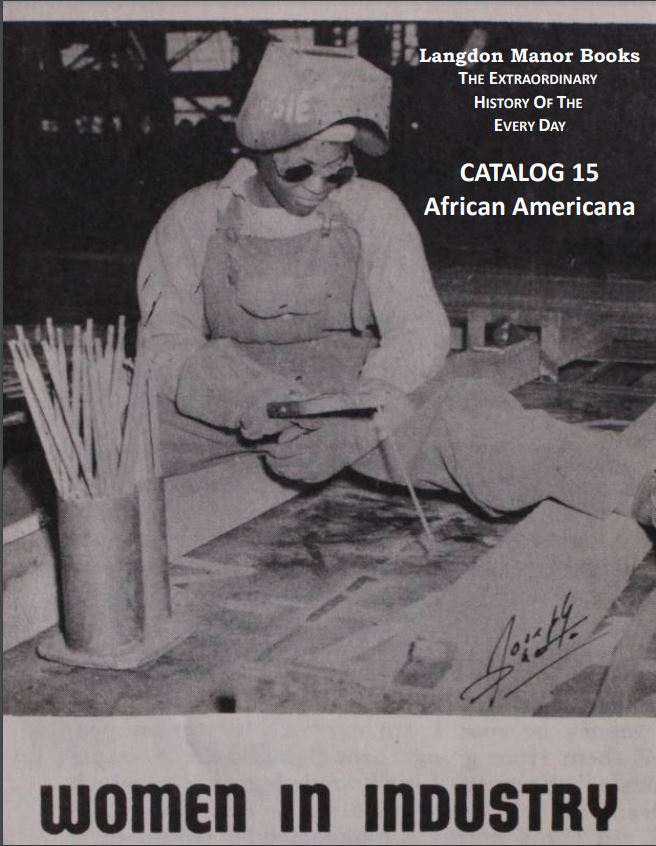 The 15th catalogue from Langdon Manor Books is titled African Americana. Langdon Manor describes the material they present as “the extraordinary history of the every day.” The items here are the work of people who fit that bill, everyday people who combine to create extraordinary history. These are not the major names of African Americana. Martin Luther King is not represented. Here you will learn about the lives of the foot soldiers, those whose combined efforts have lifted Black Americans forward on a journey harder than most of their fellow countrymen have to face. They simply had no choice. It is part of being black in America. You will find various archives, documents, photographs, books, newspapers, etc., the work product of a people. These are a few samples.

We will start by going back to the antebellum South, when most black people were slaves. This is a self-published book from 1859 entitled Narrative of the Life of Rev. Noah Davis, A Colored Man. Written by Himself, at the Age of Fifty-Four. This is not a story of beatings and escapes, nor one of anger at the wrongs the man faced. Still, it shows the difficulty and sadness that black families faced under that cruel institution. Davis, born into slavery in 1804, was apprenticed to a shoemaker where he learned to read and write. He was baptized at the Fredericksburg (Virginia) Baptist Church, became a deacon, and was licensed to preach by white officials. Still, he was a slave. In 1845, he asked his owner if he could purchase his freedom. The request was granted and a price of $500 set. Davis was allowed to go North to preach and raise money. He raised $150. He had returned to Fredericksburg and opened a shoe shop when he was offered a position as a missionary in Baltimore which would give him the rest of the money. That left him torn. The problem was that he had a wife and seven children in Fredericksburg, all slaves. What a difficult predicament that was. He accepted the offer, purchased his freedom in 1848, and earned enough money to purchase his wife and two youngest children's freedom. By 1856, he still had three children enslaved when the rich widow who owned them died. That meant they would be auctioned and they were of the age that would bring a hefty price. This book was intended to help raise more funds to free his children but we don't know what happened to the other three, though if not freed sooner and still living, they would have been emancipated by 1865. One other thing we know about Davis is that he was one of 12 black Baptist delegates who met with Abraham Lincoln in 1863 and successfully obtained the right to preach to black troops and freed slaves with the military during the Civil War. Item 48. Priced at $3,850.

Item 1 is a book recounting a trip to Africa by a descendant of Africans. Charles Spencer Smith was born in Canada in 1852 and moved to America after the Civil War. He became a minister and an educator in Freedman's Bureau schools. He served two years in the Alabama House of Representatives during Reconstruction. Around 1895, he undertook a “long-cherished desire to see Africa.” His journey lasted 147 days and he traveled 2,500 miles by land, 18,500 by sea. He wrote about it in Glimpses of Africa... published in 1895. He was surprised to see how well entrenched Europeans were in the land of his ancestors. He wanted to see whether Africa needed “educated and industrious young Americans – descendants of her own sons” to develop the land. He found that Africa had more natives fit for professional and clerical jobs than there was need. He concluded, “It seems to me the height of folly for persons to leave their native land and go to any country with the hope of bettering their condition, unless they have a reasonable assurance before leaving that their condition can thereby be improved. My advice to young Americans of African descent is to prepare themselves for a manful struggle for existence and well-being in the land of their birth.” $1,875.

Here is some music you don't know. Probably no one else does either. This must be the ultimate obscurity. It is sheet music for At Sorrow's End, circa 1930. The composer was Harold O'Reilly Clint. The sheet music explains it's “dedicated to the Booker T. Washington Memorial, Detroit, Mich.” The cover has artwork depicting Washington “Lifting the Veil of Ignorance.” There is a problem with all this. Langdon Manor has not been able to find any evidence of such a memorial to Booker T. Washington in Detroit let alone any references to this music. They only found one newspaper reference to a “tiny Booker T. Washington Memorial Park started by some Black lawyers,” but it not clear whether this is the same. Neither OCLC nor Google finds anything about this music. As for the writer, Harold O'Reilly Clint, he did exist and can be found on Google, though this song cannot. In fact, Clint actually co-wrote the official state song of Michigan, My Michigan, but even this is an obscurity. Apparently, most people in Michigan believe a different song, Michigan My Michigan, is the state song, and virtually no one is aware of Clint's song, but in 1936, the state legislature officially named it the Michigan state song. Item 28. $1,250.

This next item is not a paper collectible, but it's quite a trophy. It was given as an award to leading African American editor William Calvin Chase, whose Washington, D.C., weekly newspaper was the Washington Bee (“Sting for Our Enemies – Honey for Our Friends”). He worked for a while for Frederick Douglass and was a delegate to the Republican National Conventions in 1900 and 1912. He advocated for the rights of his community through the Bee for almost 40 years, from the paper's founding in 1882 until his death in 1921. It folded the following year. Those were difficult years as the nation moved from Reconstruction to Jim Crow. Chase opposed Booker T. Washington's “Atlanta Compromise” where he agreed not to push for desegregation in return for aid to vocational schools for Blacks, though he agreed to be more supportive when the latter provided needed financial aid to his newspaper. Item 31 is a silver-plated pitcher presented to Chase on the 25th anniversary of the Washington Bee in 1905. It's a bit odd since the paper started in 1882, but perhaps there were some earlier lost editions or some such explanation. Item 31. $1,500.

Dr. John O. Vernon was a physician serving the Wellford, Spartanburg County, South Carolina, area at the turn of the century. There weren't many black doctors in the South at that time and Vernon wasn't one of them. He was white, but a substantial percentage of his patients were black, about a quarter of them. Dr. Vernon kept ledger books, two of them, 648 handwritten pages from 1883-1916. He has noted his patients race which is how we know that 313 out of about 1,200 were black. Most of his longer notes are about white patients although he was visiting one black patient's children daily for awhile. Vernon delivered babies, managed miscarriages, performed abortions, stitched wounds, treated burns, treated measles. He recorded “extracting ball from leg,” presumably from a gun, not a game. He often bartered for payment, at least 66 African Americans exchanged good or services for his care. They performed such tasks as cutting and hauling wood, ironing clothes, picking cotton, working on a barn, and exchanging food or hay for animals. Some paid with chickens, pigs and a turkey. You may remember in 2010, Sue Lowden was leading in the polls for the Republican nomination for Senator from Nevada when she made an astonishing claim, that health care costs could be lowered if patients bartered with their doctors. “You know, before we all started having health care, in the olden days our grandparents, they would bring a chicken to the doctor...” she said. She was soundly ridiculed and quickly tanked in the polls, losing the nomination, but in hindsight... maybe she had it right? Item 27. $2,750.