Catalogue 100 of the Book Arts from the Veatches 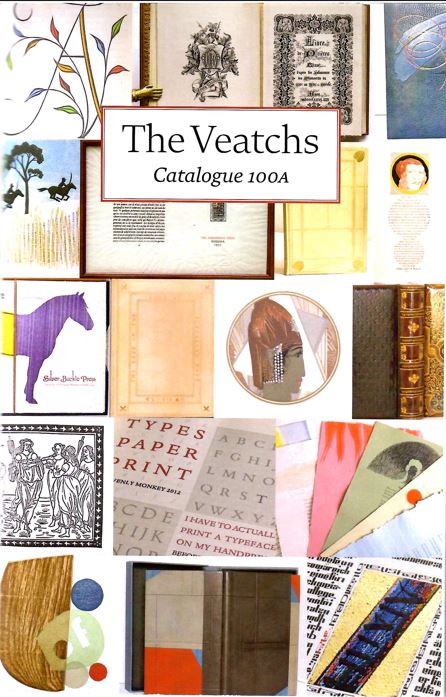 The book arts from the Veatches.

The Veatches Arts of the Book has issued their Catalogue 100A. They explain the “A” as this being half of a two-part catalogue. The “A” contains 50 examples of the book arts while “B” will emphasize the history and techniques of bookmaking. Part “B” is scheduled to be released in the spring. These are a few examples from the book arts.

Theodore De Vinne was a noted printer and writer from the latter 19th century to the early twentieth. We start with an essay/leaf book, the essay written by De Vinne though the printer was the Grabhorn Press, the book being published a decade after he died. The title is Aldus Pius Manutius, published in 1924. This is No. 18 of 192 copies. The leaf comes from the Aldine Hypnerotomachia Poliphili, printed in Venice in 1499. This book is noted for its “perfect integration of text and woodcut illustration.” De Vinne was noted for his exceptional printing of woodcut illustrations. The leaf displays two women holding a boy in the air who is peeing. I'm not sure this is how they did it in 1499 but this was before toilets so who knows? Item 15. Priced at $1,500.

The Veatchs describes this book as “breathtaking.” That is an understatement. This must be one of the greatest technological accomplishment of the nineteenth century. The title is Livres de Prieres Tissé d'apres les Enluminures des Manuscrits du XIVe au XVIe Siecle (Prayer Books Woven from Manuscript Illuminations from the 14th to 16th Century). That is literally what it is. It is a book that is not printed but woven. The massive undertaking took two years to complete, 1886-1888. It was produced by the firm of J. A. Henry. The fine thread had to be tightly woven together, something well beyond the capacity of handwork. It was produced on a loom which had to be intricately instructed how to proceed. It needed detailed computer code but computers didn't exist at the time. What it used was a punch card system to instruct the loom. Each page required over 5,000 punch cards, hundreds of thousands in all. Cards were laced together to provide continuous weaving. They needed 50 trials to finally get it right. It took two years to weave the 50-60 copies that were made. Item 50. $37,500.

This is another remarkable book from the nineteenth century. It has been described as “a unique riot of red, yellow and blue,” and by type designer Ruari McLean as “one of the oddest and most beautiful books of the whole century.” That comment in itself is odd because it was meant to be a practical book, not a work of art. The title is The First Six Books of the Elements of Euclid in which Coloured Diagrams and Symbols are used instead of Letters for the Greater Ease of Learners, created by Oliver Byrne and published in 1847. Byrne came up with an unusual method of learning geometry. He used colored shapes instead of letters to express geometric formulas, thinking this would be easier to learn. He explained, “It is based on the theory that by means of colour the Elements of Euclid can be acquired in less than one third the time usually employed.” Having looked at his colored squares, triangles and such I think it would be monumentally more difficult to learn this way, and the public evidently felt the same as 792 copies from the print run of 1,000 were left when the printer went bankrupt. Nevertheless, London printer William Pickering did a masterful job of keeping the register accurate with all of these different colors in tiny shapes. And while the book was essentially useless for its stated purpose, it is a beautiful work of some sort of pre-Cubist art. Item 19. $12,500.

Antonio Frasconi came to America from Uruguay in 1945 and soon was recognized for his artistic skills. His specialty was woodcuts and he did portraits in wood of many American figures. This book is such a compilation of portraits of one man, but this is nothing like typical portraiture. He has taken the face of then President Lyndon Baines Johnson and superimposed it on many other persons or characters. That includes George Washington, a predecessor as President who dressed differently, and lots of cartoon or fictional characters including Superman, Tarzan, Batman, Crazy Cat, Daddy Warbucks, the Lone Ranger, and Dick Tracy (replete with his two-way wrist radio – Chester Gould anticipated the Apple Watch in the days when rotary telephones were the latest technology). There are nine color woodcuts and nine stencil-cut pages with black or dark blue woodcuts. The title is The Portrait, published in 1967. You don't have to worry that someone you know also has a copy as only five were made. This is No. 2. Item 21. $6,000.

Here is a work whose title could make you shudder – A Decree of the Star Chamber Concerning Printing, Made July 11, 1637. The thought of the Star Chamber is never pleasant. This particular decree censored “seditious” and “offensive” books. Licensing was also required of printers. However, this copy was not printed in 1637 but in 1884. It was published by the Grolier Club of New York and it was the first publication by the Grolier, from the year they were founded. They picked this decree to print as it was an example of the futility, even counterproductivity, of such censorship. Within a few years there would be a revolution, and King Charles I, under whom it was issued, would have his head removed. Maybe if he had allowed a free press he would have understood the discontent before it was too late. The Grolier reprint was printed by Theodore De Vinne and this copy features a binding from the Grolier bindery by R. W. Smith and F. Mansell. It is a spectacular binding and this copy bears the Grolier Club seal on the title page. It was sold in 1923 by Anderson Galleries for $77 in the sale of Henry Cady Sturges, a member of the Grolier, and in 1930 at Anderson by David Randall. Both Anderson catalogues are provided with the book. Item 16. $12,000.