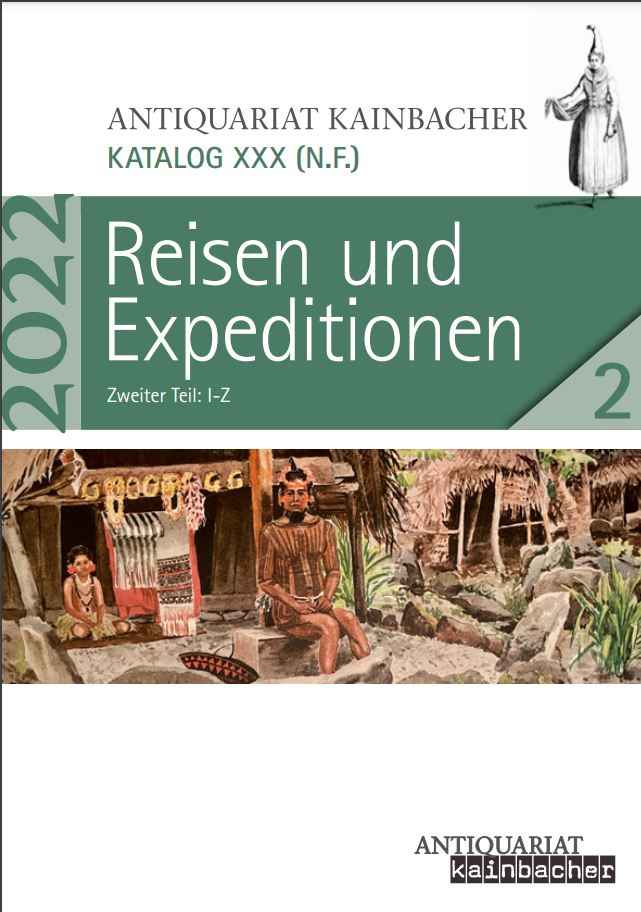 We begin with a trip you will like if you love winter... No you won't. This was way beyond winter. It is an account of the Austro-Hungarian North Pole or Payer-Wazyprecht Expedition in 1872-1874. We regularly hear stories about explorers trying to find a route from the Atlantic to the Pacific through the Arctic ocean, rather than going all the way around the southern tip of South America (in the days before the Panama Canal). Most attempts were made by going west, north of Canada, and there is much literature on the subject. However, there were also attempts to find a sea route north of Russia, a Northeast Passage. Not all that surprisingly, this one failed. As with some others, they made it as far as the island of Novaya Zemlya, and even farther north by the islands of Franz Josef Land (which they named). They didn't get any farther. They became locked in the ice and after several journeys over the ice hoping to find an opening to a route, they retreated to Russia and came home by land. This book is entitled Tagebuch des Nordpolfahrers Otto Krisch, Maschinisten und Offiziers der zweiten österr.-ungar. Nordpol-Expedition (Diary of the North Pole explorer Otto Krisch, machinist and officer in the second Austro-Hungarian North Pole Expedition). As a machinist, Krisch remained in the relative safety of the ship but it didn't do him any good. He became ill and died there in 1874. He was buried on Wilczek Island at the southeastern corner of Franz Josef Land. His shipmates brought the diary back to Krisch's brother, Anton, who published it in 1875. Priced at €1,500 (euros or approximately $1,496 U.S. dollars).

Here is another visit to a very cold place: Northward over the “Great ice”: A Narrative of Life and Work along the Shores and upon the Interior Ice-Cap of Northern Greenland in the Years 1886-1897, by Robert Peary, Volumes I-II, published in 1898. Robert Peary first traveled to Greenland in 1886 and he was so intrigued by what he saw in the far north that he would devote his career to Arctic exploration. He made several trips to Greenland over the years, thinking it might lead all the way to the North Pole. Eventually, he determined Greenland was an island. Peary met with the northern Eskimos whom he believed were the farthest northern inhabitants in the world. He learned their ways which would come in very handy when he made his later journeys. Of course, it was Peary who went on to be the first person to reach the North Pole in 1909, though some question whether he actually made it there. €350 (US $349).

Here is one more from the far north: An Account of six years residence in Hudson's-Bay, From 1733 to 1744 to 1747. By Joseph Robson Containing a Variety of Facts, Observations, and Discoveries... published in 1752. Robson was a surveyor and supervised the buildings of the Hudson Bay Company. He was less than pleased with the behavior of that company and felt they should conduct more interior explorations, but believed they played an important role for England. He felt the nation should support the Hudson Bay Company's trade as a means of keeping the French from claiming the land. Kainbacher tells us that the Appendix was written by, and the book revised by Arthur Dobbs. Dobbs was convinced there was a route through Hudson Bay to a Northwest Passage. Exploration a century earlier determined that there was not, but Dobbs went so far as to outfit an exploration by Capt. Christopher Middleton to find it. Middleton reported back that there was no such route which incensed Dobbs. He also wished Robson would find such a route but he too said none existed and didn't want to waste his time on it. €2,200 (US $2,191).

This next item is not something you're going to sit down and read through, but it is very important in the history of ocean shipping across the Atlantic. The title is Composite maritime atlas of the Atlantic comprising Wind & Current Chart (Series A), Trade Wind Chart (Series B), Pilot Charts (Series C), Thermal Wind & Current Chart (Series D), Storm and Rain Chart (Series E), Whale Sheets (Series F) (+) Explanation and Sailing Directions to Accompany the Wind and Current Charts. It sounds complex and thorough and it is. It is the work of Matthew Fontaine Maury, a fifth edition published 1849-1854 by the U. S. Hydrographical Office. Maury signed up for the Navy and was interested in studying the sea and navigation. When an injury left him unfit for sea duty, he devoted his career to studying ship logs and charts, understanding what they told him about currents, wind, and water temperatures. It enabled him to produce sea charts and he was able to obtain international cooperation in getting ships to provide him with their readings. The result of this is the outstanding collection of charts and other data that enabled captains to greatly reduce the time of their voyages. Most notable was fully understanding the workings of the Gulf Stream, which can speed journeys flowing with it enormously, while having the opposite effect on those who sail into it. Maury wrote in 1855, “There is a river in the ocean. In the severest droughts it never fails, and in the mightiest floods it never overflows; its banks and its bottom are of cold water, while its current is of warm; the Gulf of Mexico is its fountain, and its mouth is the Arctic Sea. It is the Gulf Stream. There is in the world no other such majestic flow of waters.” €45,000 (US $44,856).

This is one of the earliest looks at Jerusalem in photographs, Jerusalem. Étude et reproduction photographique des monuments de la ville sainte depuis l‘époque judaique jusqu‘a nos jours (Jerusalem. Study and photographic reproduction of monuments of the holy city since Judaic times until our days), published in 1856. It was the work of Auguste Salzmann. Salzmann traveled to Jerusalem in 1853 and came home with almost 200 negatives. The book contains two volumes, one of text and one of photographs. The photographic album contains 40 mounted salt prints. €58,000 (US $57,832).